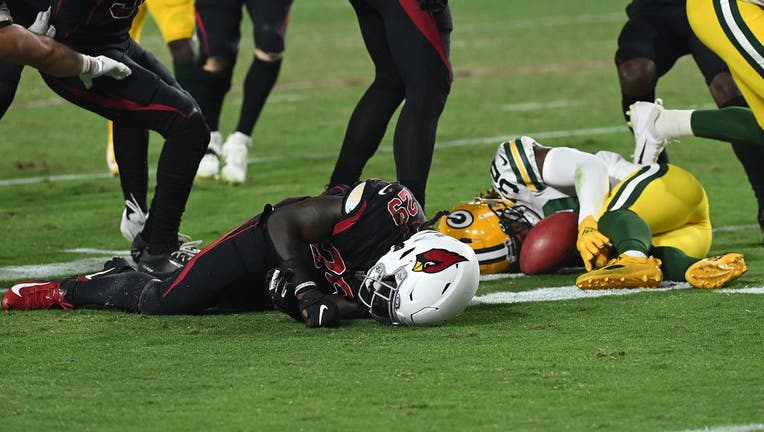 GLENDALE, ARIZONA - OCTOBER 28: Jonathan Ward #29 of the Arizona Cardinals and Kylin Hill #32 of the Green Bay Packers are injured on a play during the second half of a game at State Farm Stadium on October 28, 2021 in Glendale, Arizona. (Photo by No

Players from the Green Bay Packers and Arizona Cardinals had to be carted off the field on Thursday night during their game after colliding in the third quarter.

On a kickoff, Packers returner Kylin Hill brought the ball out of the end zone to about his own 9-yard line when he was met by Cardinals player Jonathan Ward. Hill was hit in the midsection by Ward and the replay at full speed showed just how scary the play was.

Both players needed to be carted off the field. Hill was sitting up while he was on the back of the Packers’ cart while Ward was put on a backboard and carried out. Ward gave a thumbs up while he was leaving the field.

Green Bay said Hill was out for the rest of the game with a knee injury.

Arizona said Ward was being evaluated for a concussion and a neck injury. He had movement in all of his extremities, according to the team.

Hill, a running back, was a seventh-round pick of the Packers in 2021. The rookie has mostly played special teams but was able to carry the ball 10 times for 24 yards in his first seven games. He did not have a touchdown.

Ward signed with Arizona in 2020 as an undrafted free agent. He’s played mostly special teams in 2021 but has seen minimal time running the ball. He has 21 rushing yards on five carries.