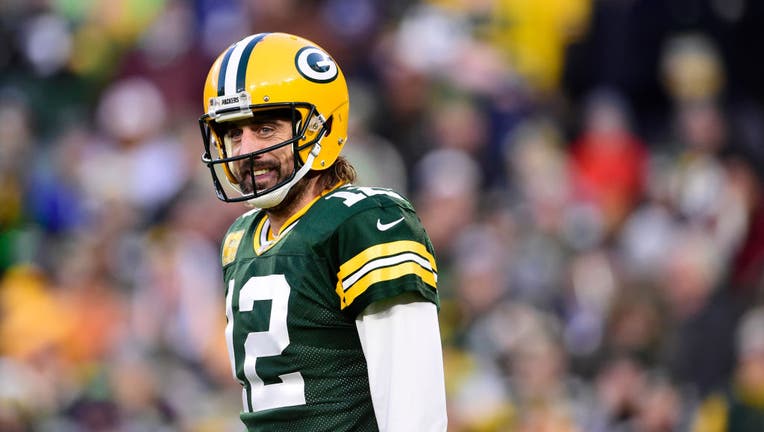 GREEN BAY, Wis. - Green Bay Packers quarterback Aaron Rodgers played Sunday’s game against the Minnesota Vikings with an injured toe. And during the first half of their 34-31 loss to their divisional rivals, Rodgers had his foot stepped on, which made the injury even worse.

Rodgers said that the injury is "a little worse than turf toe" and added that it’s "very, very painful."

Rodgers said that he has a bone issue in his pinkie toe.

"I believe that I mentioned that it was more painful than turf toe, and I had turf toe two years ago," Rodgers said on "The Pat McAfee Show" on Tuesday. "The problem with turf toe is it’s that joint in your big toe, and it is very painful. So naturally, I’m leading people to understand that if it’s worse than turf toe, there must be some sort of bone issue. Again, it’s better the fifth toe than the first toe or even the second or the third or probably the fourth toe."

"I’ve already talked enough on this show about my medical status. I’ve given you enough information at this point. I have a toe injury that’s not going away, and I’m going to be dealing with it at least the next few weeks."

Rodgers completed 23 of 33 passes for 385 yards with four touchdowns in the loss to Minnesota. The Packers will look to get back on track when they host the Los Angeles Rams next Sunday. Rodgers says he plans on continuing to play despite the injury.

"One option that’s not on the table is sitting out. I’m going to push through this," Rodgers said.

Lily Zhao goes one-on-one with Aaron Jones to get his thoughts on losing another key player and what his A&A All the Way Foundation is doing this Thanksgiving.