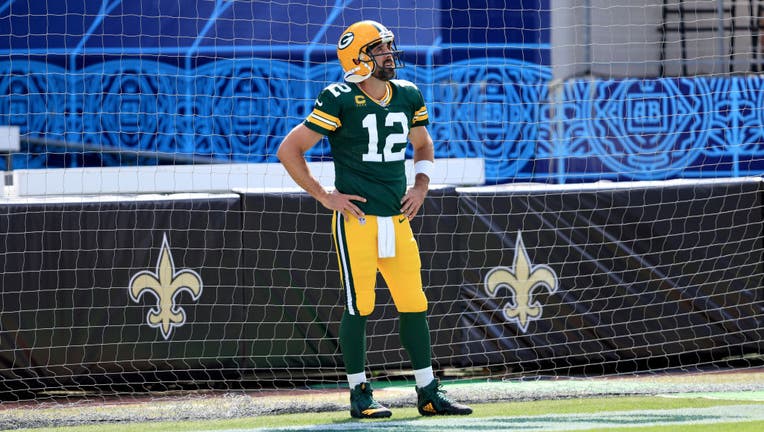 JACKSONVILLE, FLORIDA - SEPTEMBER 12: Aaron Rodgers #12 of the Green Bay Packers looks on prior to the the game against the New Orleans Saints at TIAA Bank Field on September 12, 2021 in Jacksonville, Florida. (Photo by Sam Greenwood/Getty Images)

GREEN BAY, Wis. - Aaron Rodgers and the Green Bay Packers struggled mightily against the New Orleans Saints in a 38-3 beatdown on Sunday afternoon.

The future Hall of Fame quarterback looked nothing like the reigning league MVP.

Rodgers completed 15 of 28 passes and finished with 133 passing yards and two interceptions.

Former NFL quarterback Carson Palmer made an appearance on "The Herd with Colin Cowherd" on Monday and talked about Rodgers’ performance against the Saints.

"Aaron looked uncomfortable," Palmer said during the TV segment. "He looked like he had cement boots on at times. Something was holding him back and holding him down."

Rodgers and the Packers had an offseason for the ages.

The veteran quarterback talked about being unhappy in Green Bay, and since he was away from the team for most of training camp, the team’s rust definitely showed during the first game of the season.

The media certainly has reacted to Rodgers’ poor play, but he could easily put it to rest with a bounce-back performance against the Detroit Lions on Monday Night Football next week.

The Mega Millions lottery jackpot has soared to $383 million for the drawing on Tuesday, Sept. 14. The cash option is worth $277.3 million.