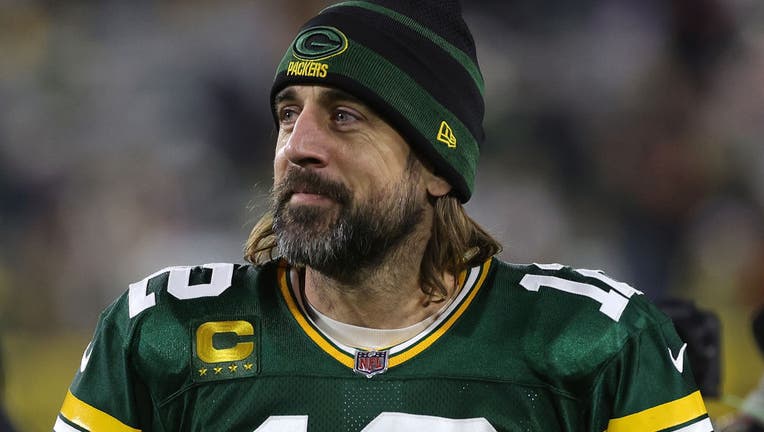 GREEN BAY, WISCONSIN - DECEMBER 25: Aaron Rodgers #12 of the Green Bay Packers leaves the field following a game against the Cleveland Browns at Lambeau Field on December 25, 2021 in Green Bay, Wisconsin. The Packers defeated the Browns 24-22. (Photo

GREEN BAY, Wis. - Aaron Rodgers didn’t hold back a day after an NFL reporter made controversial comments regarding voting for the Green Bay Packers quarterback for the league MVP award.

According to ProFootballTalk, Hub Arkush — one of the 50 media members who votes for the NFL MVP award — said that he won't vote for Rodgers because he’s "the biggest jerk in the league."

Rodgers fired back at Arkush, who made remarks about the quarterback regarding his vaccination status.

"He's a bum. I think he's an absolute bum," Rodgers said Wednesday. "You don't know me. I don't know who he is. Nobody knew who he was probably until yesterday's comments."

"In my opinion, [the NFL] should exclude future votes [from Arkush]. His problem isn't with me being a bad guy or the biggest jerk in the league. ... His problem is I'm not vaccinated."

Rodgers is the frontrunner to land his fourth NFL MVP trophy, which is by far the most among active players and would be behind only Peyton Manning (5) for the most in league history.

Arkush claimed that Rodgers doesn’t deserve the award this year because of his dramatics and rollercoaster offseason. Rodgers hinted at retiring and was open to joining another team. He also openly criticized the Packers’ front office and discussed his disappointments with the team’s draft strategies.

"I don’t think you can be the biggest jerk in the league and punish your team and your organization and your fan base the way he did and be the most valuable player," Arkush said during an appearance on Chicago radio station WSCR-AM.

Despite the off-the-field controversy, Rodgers and the Packers enter the final week of the regular season with a 13-3 record, and they locked up the No. 1 seed in the playoffs for a second–consecutive year.

"Has he been the most valuable on the field? Yeah, you could make that argument, but I don’t think he is clearly that much more valuable than Jonathan Taylor (Colts running back) or Cooper Kupp (Rams wide receiver) or maybe even Tom Brady (Buccaneers QB). So from where I sit, the rest of it is why he’s not gonna be my choice," Arkush said.

Arkush continued: "Do I think he’s gonna win it? Probably. A lot of voters don’t approach it the way I do, but others do, who I’ve spoken to. But one of the ways we get to keep being voters is we’re not allowed to say who we are voting for until after the award has been announced. I’m probably pushing the envelope by saying who I’m not voting for. But we’re not really supposed to reveal our votes.]"

"There are no guidelines. We are told to pick the guy who we think is most valuable to his team. And I don’t think it says anywhere, ‘strictly on the field,’ although I do think he hurt his team on the field by the way he acted off the field."

Due to a staff shortage, Janes Elementary School in Racine will move to remote learning for Thursday, Jan. 6.

Firefighters on Thursday, Jan. 6 responded to the scene of a house fire near 22nd and Wright in Milwaukee.

A Milwaukee EMT seriously injured in a crash involving an ambulance and Milwaukee County Transit System bus was released from the hospital on New Year's Eve after three weeks of treatment.