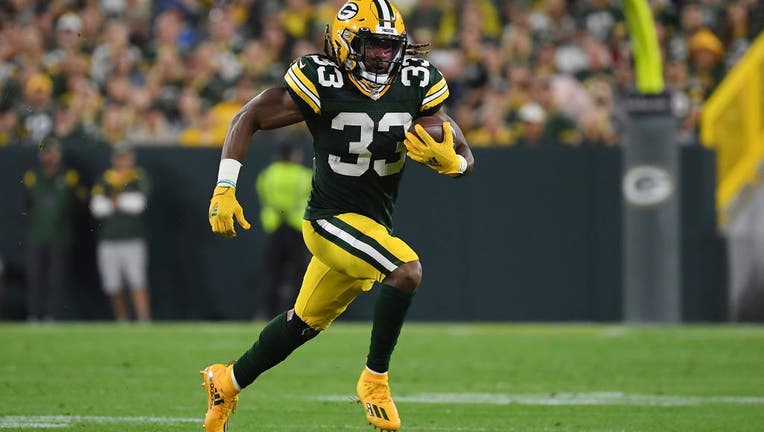 GREEN BAY, Wis. - UPDATE: The football with the ashes was later found.

Green Bay Packers running back Aaron Jones was playing Monday night with a heavy heart and left it all on the field in the team’s 35-17 victory over the Detroit Lions.

Jones was playing in his first home game at Lambeau Field since the death of his father, Alvin Jones Sr., earlier this year. Alvin Jones Sr. died of complications from coronavirus in April. He was 57.

The star running back said in May he was dedicating the rest of his career to his father.

On Monday, Aaron Jones had a dominating performance. He had six catches for 48 yards and three touchdowns. He also added 17 carries for 67 yards and a score on the ground.

"He was really on my heart. I actually have a chain with a football and his ashes are in it. I scored and it fell off in the end zone. So, I’ll go look for it but he’d be happy. He’d be like if you lose it anywhere, lost it in the end zone," Jones told ESPN’s Lisa Salters.

Jones said the grounds crew was looking for it.

He told reporters in the postgame news conference if there was any place to lose it, his father would have wanted him to lose it in the end zone at Lambeau Field.

The running back remembered his father earlier in the year and revealed just how close he was with him.

"He was at every game, and before the game, I would go to a certain spot where he was sitting. I’m still going to go there and have my moment with him," he said in May, via KTSM-TV. "I know he’s there; he’s got the best seat in the house. I know he’s up there watching me and it’ll be special."

Fortunately, Jones confirmed during a Tuesday morning radio appearance that the necklace had been found.

Aaron Jones caught three of Aaron Rodgers’ four touchdown passes and rushed for a fourth score, and the Green Bay Packers had a welcome return to normal after an embarrassing opening-week loss, beating the Detroit Lions 35-17 on Monday night.