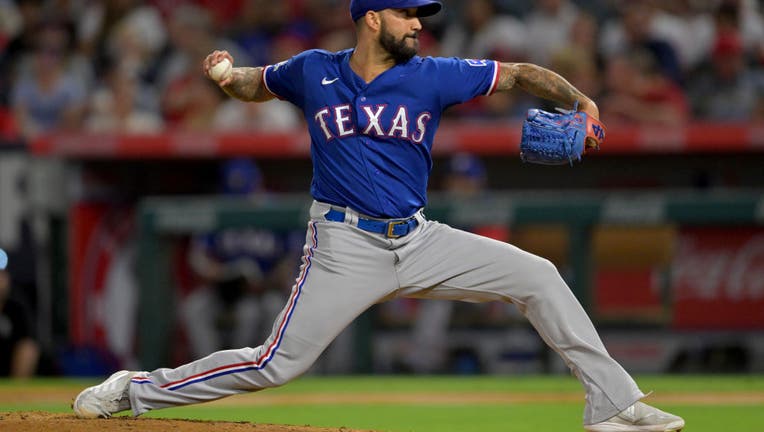 ANAHEIM, CA - JULY 28: Matt Bush #51 of the Texas Rangers pitches in the game against the Los Angeles Angels at Angel Stadium of Anaheim on July 28, 2022 in Anaheim, California. (Photo by Jayne Kamin-Oncea/Getty Images)

Bush is 2-1 with a 2.95 ERA and one save in 40 games this season, including five starting in an opener role. He hasn't allowed an earned run over his last 12 appearances.

He was brought in to help fortify the Brewers' bullpen on the same day they traded All-Star closer Josh Hader to San Diego for reliever Taylor Rogers and three other players.

"A little shocked, definitely wasn’t expecting it, but I guess just a bittersweet moment," Bush said. "It’s also really exciting to go to the Brewers, a team that’s really winning right now and has a chance of going to the playoffs and doing big things."

Texas got Mathias and left-handed pitcher Antoine Kelly. Mathias will be added to the 40-man roster with the Rangers, and Kelly will be assigned to their minor league system.

Bush was a 30-year-old rookie when he made his major league debut with Texas in 2016. That first game came nearly 12 years after he was drafted, the longest gap for an overall No. 1 to make his debut.

"It's really hard to say goodbye here. This has been home for me for quite a while," Bush said. "My family and I have been treated so well here and I feel like the organization’s always taken care of myself first and then baseball."

While with the Tampa Bay Rays organization in 2012, Bush had a DUI accident during spring training that seriously injured, and nearly killed, a 72-year-old man on a motorcycle. Bush spent 3 1/2 years in prison.

The Rangers scouted Bush in the parking lot of a restaurant where he was employed while in a work-release program for the final months of his prison sentence in the fall of 2015.

Bush twice had surgery on his right elbow while with the Rangers. After missing all of 2019 and 2020, his only appearance for Texas last year was a scoreless inning in the season finale.

After a procedure in 2018 to repair and reinforce the partially torn ulnar collateral ligament didn't work, Bush needed Tommy John surgery in 2019. It was the second time he had that ligament replacement surgery since converting from shortstop to pitcher not long after getting drafted.

Mathias, who turns 28 on Tuesday, has started five games at second base for the Brewers this season. He made his big league debut playing 16 games for Milwaukee in 2020 before missing all of last season with a torn labrum in his right shoulder.

The 22-year-old Kelly, a selection for the All-Star Futures Game, was a second-round pick by the Brewers in the 2019 draft. He was 2-4 with a 3.86 ERA in 19 starts at Class A Wisconsin this season.