Professional sports leagues in the United States each hold annual drafts, but they use different methods in determining the draft order.

CLEVELAND - First-round draft picks are supposed to be the best of the best, but star power comes from the second and third rounds every single year.

The opening round wrapped up late Thursday night with plenty of storylines to focus on. 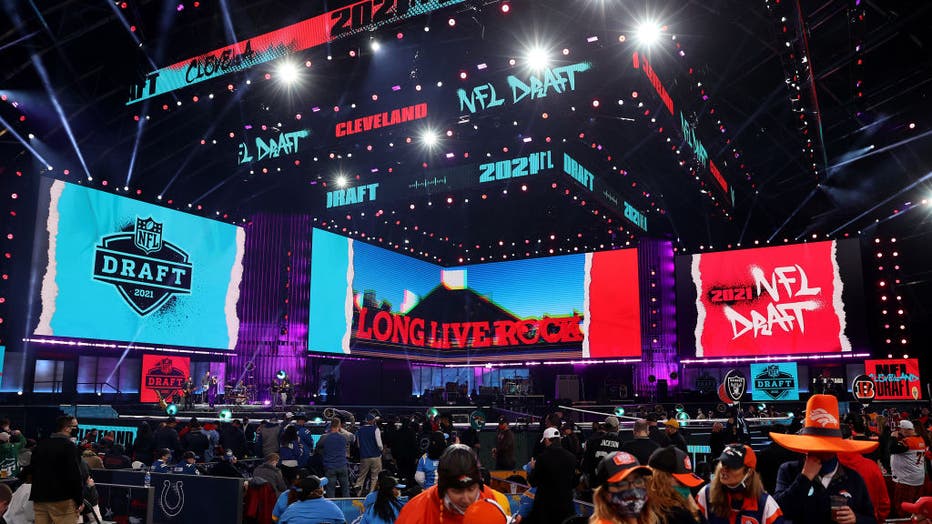 Fans wait for the start of the 2021 NFL Draft at the Great Lakes Science Center on April 29, 2021, in Cleveland, Ohio. (Photo by Gregory Shamus/Getty Images)

Five quarterbacks were taken in the first 15 picks.

The Southeastern Conferences provided 12 first-round draftees and the University of Alabama alone accounted for six of them.

The Big 12 Conference was shut out, as was Notre Dame.

But one of the more intriguing anecdotes was the collegiate reunions the first round created.

Trevor Lawrence, this year’s top pick, will be playing in Jacksonville with his college teammate Travis Etienne, whom the Jaguars drafted 25th overall.

When the Miami Dolphins drafted Jaylen Waddle with the following pick, it reunited him with Tua Tagovailoa, his teammate at Alabama.

And when the Philadelphia Eagles selected DeVonta Smith, it meant he’d get to catch passes again from Jalen Hurts — whom he teamed with at Alabama.

Additional reunions are possible as the draft resumes Friday.

Notre Dame is expected to get on the board. Jeremiah Owusu-Koramoah is still available and NFL squads would love to fill their ranks with the winner of the Butkus Award — which goes to the nation’s top linebacker.

And of course, expect more Alabama players to hear their names called. After Thursday’s first round, the Crimson Tide has produced 112 NFL draft picks since Nick Saban became head coach in 2007.

"It just makes me feel like a proud papa," Saban told ESPN after watching his newest batch of first-rounders.

Rounds 4 through 7 will take place Saturday, beginning at noon ET.