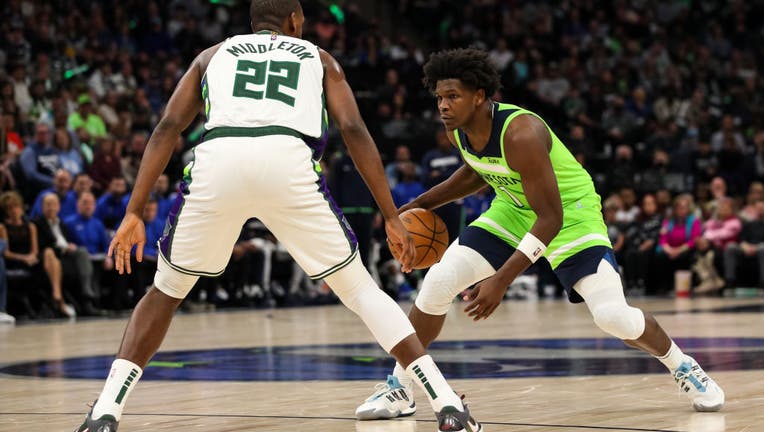 MINNEAPOLIS, MN - MARCH 19: Anthony Edwards #1 of the Minnesota Timberwolves dribbles the ball while Khris Middleton #22 of the Milwaukee Bucks defends in the second quarter of the game at Target Center on March 19, 2022 in Minneapolis, Minnesota. Th

MINNEAPOLIS - Karl-Anthony Towns had 25 points and 11 rebounds, Anthony Edwards scored 25 points and the Minnesota Timberwolves pulled away for a 138-119 victory Saturday over the Milwaukee Bucks, who were playing without star Giannis Antetokounmpo due to right knee soreness.

Naz Reid added 14 points off the bench for Minnesota in a matchup that turned testy early. Timberwolves guard Patrick Beverley and Milwaukee’s George Hill were both ejected after a first-quarter skirmish.

Minnesota won for the 10th time in 11 games by taking control in the third quarter with a barrage of 3-pointers. The Timberwolves shot 22 of 47 from 3, including 9 of 14 in the third.

Khris Middleton scored 15 for Milwaukee, which had won eight of nine. Antetokounmpo was ruled out as the team manages the strain on his knees.

Jrue Holiday added 14 points and Brook Lopez scored 15 in his third game back after recovering from back surgery. Lopez took Antetokounmpo’s spot in the starting lineup.

Beverley has made an impact on his new team, helping inject some swagger to a Minnesota team that has made the playoffs once in 17 years.

The Timberwolves also have gained confidence with a March run that included a 124-104 win over the Los Angeles Lakers that had Minnesota — with Beverley playing his usual abrasive role — eagerly trash talking LeBron James, Russell Westbrook and the Lakers.

Minnesota coach Chris Finch was pleased with his team but knew the upcoming schedule would test his team.

Without Antetokounmpo on the other side, the Timberwolves kept their run going.

Edwards had 12 points in the first quarter to get Minnesota off to a strong start before tension emerged.

Beverley and Hill were ejected and later Milwaukee’s Bobby Portis Jr. and Reid were given matching technical fouls. The Timberwolves weren’t afraid to share their newfound confidence, but the defending champion Bucks weren’t taking it.

The feistiness was toned down in the second half as Minnesota made any talking a moot point.

Edwards hit three 3s in the third and Towns scored eight in the quarter with a pair of 3s as the Wolves scored 38 in the quarter and led by as many as 24.

Bucks: G Pat Connaughton returned for his first game since breaking a bone in his right hand on Feb. 10. He had 15 points off the bench.

Timberwolves: Towns was questionable for the game with a right forearm contusion. There were several moments where the injury appeared to bother the All-Star big man. … F Jaden McDaniels missed his second game with a left ankle sprain. Reid was back after missing two games with back spasms.

Timberwolves: At Dallas on Monday.

The Green Bay Packers and Rasul Douglas have agreed to a new three-year contract, a person familiar with the situation told the Associated Press.