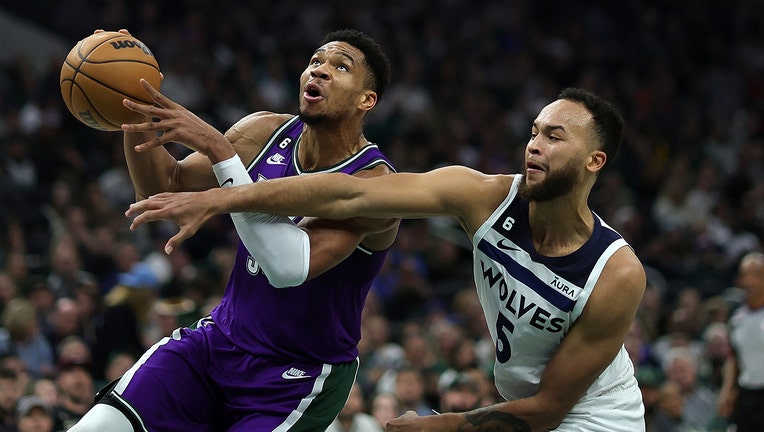 Giannis Antetokounmpo is fouled by Kyle Anderson of the Minnesota Timberwolves at Fiserv Forum on Dec. 30. (Photo by Stacy Revere/Getty Images)

MILWAUKEE - Giannis Antetokounmpo had 43 points and 20 rebounds and the Milwaukee Bucks snapped a four-game losing streak with a 123-114 victory over the Minnesota Timberwolves on Friday night.

Antetokounmpo finished two points off his season high and also had five assists to join Wilt Chamberlain and Elgin Baylor as the only players in NBA history with back-to-back games of at least 40 points, 20 rebounds and five assists. Chamberlain did it five times and Baylor once, with Chamberlain the last to do it Jan. 6-7, 1966.

Antetokounmpo has topped 40 points in four of the last six games.

Anthony Edwards led Minnesota with 30 points on 10-of-20 shooting. Luka Garza and Jaylen Nowell each had 16 points in the Timberwolves' fifth straight loss.

Minnesota center Rudy Gobert sat out because of a non-COVID illness and star forward Karl Anthony-Towns did not play because of a strained right calf.

Milwaukee outscored Minnesota 39-22 in the quarter. Joe Ingles accounted for eight of those points, six on a pair of 3-pointers, then hit another 3 for Milwaukee's first points of the fourth. Ingles finished with 14 points and 10 assists.

Minnesota made one last run, clawing within seven after Edwards recovered from a hard fall to make a pair of free throws with 4:13 left.

Timberwolves: Kyle Anderson returned to Minnesota’s starting lineup after missing the last five games because of back spasms. … The Timberwolves are 3-3 in the first game of back-to-backs this season.

Bucks: Jrue Holiday and George Hill were held out Friday night after coming down with a bug that’s been making its way through Milwaukee’s locker room.