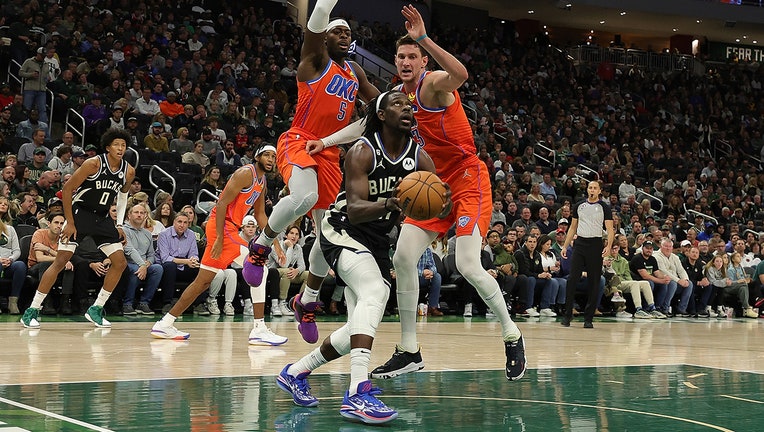 Antetokounmpo sat out for the first time this season. He was listed as "questionable" with left knee soreness after recording his first triple-double of the season a night earlier in Minnesota. He did not go through warmups ahead of the game, and head coach Mike Budenholzer said before that game that the league’s second-leading scorer at 32.6 points per game would get the night off.

With Antetokounmpo out, Lopez led Milwaukee on 10-of-16 shooting that included four of the Bucks’ 17 3-pointers. Jevon Carter and Grayson Allen each added five 3s and finished with 18 points and 19 points, respectively. Bobby Portis notched fifth double-double of the season with 12 points and 21 rebounds. Jrue Holiday also finished with a double-double, scoring 10 points with 13 assists.

After finishing the opening quarter tied at 34, the Thunder trailed by as many as 24 before hitting four 3-pointers in the closing minutes of the third. Oklahoma City opened the fourth on a 7-2 run that cut Milwaukee’s lead to 95-85 with 10:22 to play.

The Bucks responded with an 11-2 run over the next three minutes to put the game away.

Thunder: The loss was Oklahoma City’s third in four road games this season. … Gilgeous-Alexander came into the game averaging 32.3 points, good for third in the league and just 0.3 points behind Antetokounmpo.

Bucks: With Antetokounmpo sitting out for the first time this season, first-round draft pick MarJon Beauchamp got his first career start Saturday night.

Thunder: At Detroit Piston on Monday.

Bucks: At Atlanta Hawks on Monday.