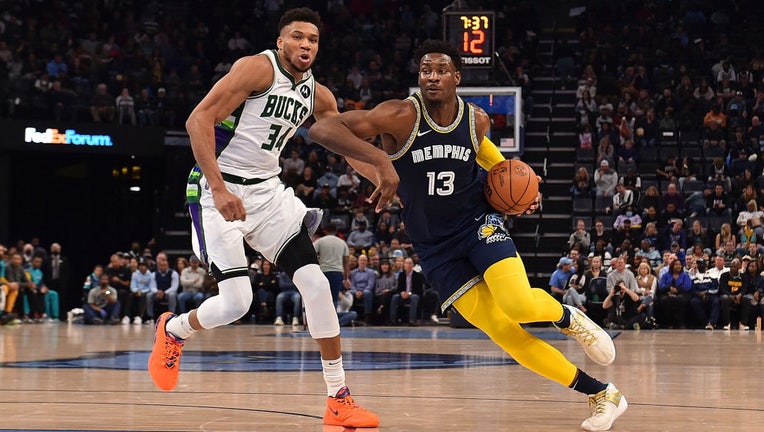 MEMPHIS, TENNESSEE - MARCH 26: Jaren Jackson Jr. #13 of the Memphis Grizzlies handles the ball against Giannis Antetokounmpo #34 of the Milwaukee Bucks during the first half at FedExForum on March 26, 2022 in Memphis, Tennessee. NOTE TO USER: User ex

Dillon Brooks scored 19 points and Jaren Jackson Jr. had 16 and two blocks to help Memphis win its fourth straight and eighth in the last nine games. Melton was 8 of 11 from the field, going 6 of 9 from 3-point range.

Giannis Antetokounmpo led the Bucks with 30 points, 11 rebounds and four blocks, scoring 18 points in the third quarter when Milwaukee tried to make a run. Khris Middleton added 16 points. The defending champion Bucks lost for only the third time in the last 13 games.

Milwaukee dropped into a tie for third with Boston in the Eastern Conference, a half-game behind Philadelphia and Miami.

Antetokounmpo was listed as questionable before the game with a sore right knee, but after going through pregame warmups was deemed ready to play. Meanwhile, the Grizzlies continued to play without Morant who is nursing a sore right knee.

The Bucks had trouble connecting on their first-half shots and were under 30% overall near the midway point of the second quarter. Antetokounmpo was 3 of 11 in the first half, part of Milwaukee's 32% shooting.

Antetokounmpo came out with much more aggression in the second half making his way to the basket and helping Milwaukee chip into the Memphis lead. But near the three-minute mark, Melton connected on a trio of 3-pointer to take the Grizzlies lead to 22.

Bucks: Jrue Holiday, who has led the team in scoring the last two games and was averaging 23 points in the last five, sat out with left ankle soreness. … Middleton passed Vin Baker for 11th place on the Bucks' career rebounding list. Baker had 3,080. …Saw an end to their four-game winning streak in Memphis. … Bobby Portis Jr. had a season-high eight offensive rebounds.

Grizzlies: Memphis has a seven-game home winning streak. … Steven Adams grabbed his third offensive rebound in the second half to set a new single-season franchise record. He passed Zach Randolph who had 330 offensive boards in 2009-10. … Tyus Jones finished with 13 points and 10 assists.

Bucks: At Philadelphia on Tuesday night.

Milwaukee police continue to look for the driver who hit and killed a bicyclist. People who live nearby said the crash, unfortunately, is not a surprise.

Greater Milwaukee housing market; realtors on what to know

The Greater Milwaukee housing market saw record sales in 2021. With demand outweighing supply, realtors say there are ways to get ahead of the competition.

History was made at Fiserv Forum on Thursday night as, for the first time, a female public address announcer worked the Milwaukee Bucks' game.