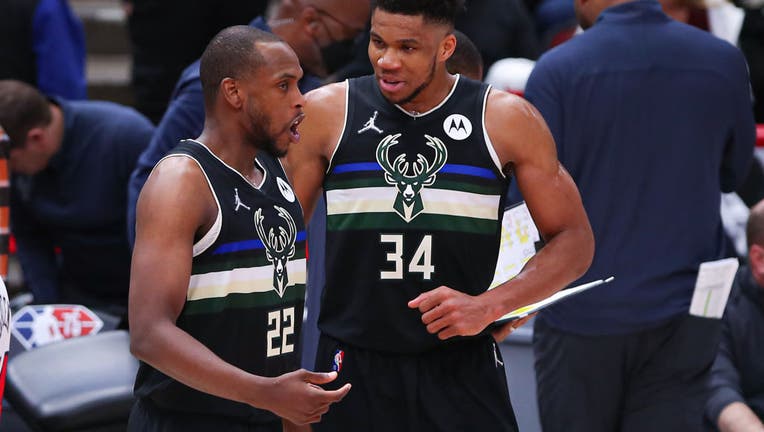 CHICAGO - Giannis Antetokounmpo had 34 points and 16 rebounds, Jrue Holiday came on strong down the stretch to finish with 26 points and the Milwaukee Bucks beat the Chicago Bulls 118-112 on Friday night.

Holiday scored 10 points over the final five minutes as the defending champion Bucks tied the Bulls for the Central Division lead with their third straight victory.

Antetokounmpo made 12 of 22 shots and had five assists, helping make up for a 10-for-19 showing at the foul line.

Khris Middleton scored 22 points as the Bucks beat Chicago for the 14th time in 15 games.

Zach LaVine led Chicago with 30 points. DeMar DeRozan scored 29 points, though he was 11 for 30 from the field.

Chicago led 102-100 after Javonte Green nailed a 3 with six minutes remaining. Milwaukee then scored six straight, with Middleton's turnaround jumper making it a four-point game with just over four minutes left, and maintained the lead the rest of the way.

LaVine cut it to 112-109 when he drove for a layup with 47 seconds remaining. Antetokounmpo made two free throws before LaVine buried a 3 to pull Chicago within 114-112 with 24.4 seconds left.

A reverse layup by Jevon Carter bumped Milwaukee's lead to four. The Bucks then won a challenge after Middleton got called for a foul as LaVine attempted a 3 and controlled the jump ball.

Holiday then made two free throws with 12.5 seconds left.

Bucks guard Grayson Allen got booed during introductions and throughout the game for a hard foul that resulted in a broken wrist for Alex Caruso when the teams met Jan. 21 in Milwaukee. Caruso has not played since that game, leaving Chicago without one of its best defenders.

The crowd was delighted when Derrick Jones Jr. knocked Allen to the floor as he drove the baseline early in the fourth quarter. Jones got called for a flagrant foul. Allen made both free throws to give Milwaukee a short-lived 95-93 lead.

Bucks: C Brook Lopez is ready to participate in contact drills and five-on-five scrimmages after being sidelined since the season opener because of a back injury that required surgery. "It's another good, positive step for him on his return to play," coach Mike Budenholzer said. ... Budenholzer said the Bucks hope to get G George Hill (sore neck) back in the next week. He has been sidelined since Jan. 28. ... G Pat Connaughton "still has a ways to go" in his recovery from surgery on his right finger, Budenholzer said. Connaughton was hurt fouling Chris Paul on a drive to the basket in a 131-107 loss at Phoenix on Feb. 10. Connaughton was expected to miss four weeks.

Bulls: The Bulls are a combined 0-8 against East-leading Miami, second-place Philadelphia and Milwaukee. ... Chicago didn’t attempt a free throw until DeRozan completed a four-point play in the closing minute of the first half. The Bulls made 8 of 11. ... LaVine, who missed time recently because of soreness in his surgically repaired left knee, was not listed on the injury report. "He feels fine," coach Billy Donovan said. "I think if there were any problems, he would talk."

Milwaukee Bucks center Brook Lopez is ready to participate in contact drills and five-on-five scrimmages after being sidelined since the season opener because of a back injury that required surgery.

Today is the first Friday of Lent and many restaurants are getting ready for the annual Friday fish fry crowds.

After being halted due to the pandemic, the July 3rd fireworks along Milwaukee's lakefront are expected to return this summer.