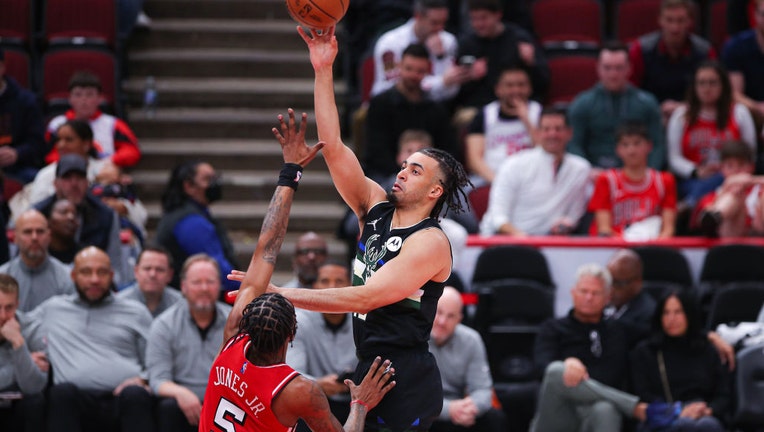 CHICAGO - Brook Lopez scored a season-high 28 points and the Milwaukee Bucks overcame a rather quiet performance from Giannis Antetokounmpo to clinch their fourth straight Central Division championship with a 127-106 victory over the Chicago Bulls on Tuesday night.

The defending NBA champion Bucks haven’t been on a run like this since Don Nelson’s teams won seven consecutive division titles in the 1980s.

They took control early and came away with an easy win even though DeMar DeRozan scored 40 for Chicago.

Antetokounmpo, trying to overtake LeBron James and Joel Embiid in a tight race for his first scoring title, finished with 18 points, nine rebounds and seven assists. But the two-time MVP started slow and spent most of the fourth quarter on the bench after picking up his fifth foul.

Lopez had his best performance after missing most of the season because of a back injury. Khris Middleton scored 19.

Grayson Allen and Bobby Portis added 13 points apiece as the Bucks completed a four-game season sweep of the Bulls.

DeRozan did all he could to carry Chicago, with two-time All-Star Zach LaVine sidelined because of ongoing soreness in his left knee.

Patrick Williams added 18 points. Nikola Vucevic struggled, going 3 of 19 and scoring seven points. He did draw loud cheers when he knocked Allen to the floor early in the fourth quarter, delighting fans angry about Allen's hard foul earlier this season on Chicago’s Alex Caruso that resulted in a broken wrist.

But the Bulls once again lost to an elite opponent. They are a combined 2-20 against the top four teams in the East and West.

Chicago also fell to sixth place in the Eastern Conference, a game behind Toronto with three to play. The Raptors beat Atlanta.

Vucevic hit a corner 3-pointer for Chicago just before the halftime buzzer and DeRozan hit a jumper in the opening seconds of the third to cut it to 58-48.

Milwaukee regrouped and pushed the lead to 21, only to have the Bulls get within 10 again late in the third. Two free throws by Antetokounmpo in the closing minute of the quarter and a 3 from the top by Jrue Holiday made it 96-80 before DeRozan hit jumper to cut the margin to 14 heading to the fourth.

Bucks: Antetokounmpo was available despite a sore right knee.

Bulls: PG Lonzo Ball experienced another setback in his recovery from surgery for a torn meniscus in his left knee, raising more doubt about whether he will play again this season. Ball felt some discomfort after he tried to ramp up activities again following a 10-day pause, coach Billy Donovan said. Donovan said the next step will probably be a "meeting of the minds" in the next day or two. And the possibility of Ball missing the remainder of the season is "on the table." Ball has not played since Jan. 14. ... Donovan said he didn't necessarily get the sense that LaVine will need to miss a chunk of games, though his status for Wednesday's matchup with Boston was in question.

Bulls: Host the Celtics on Wednesday.

The Office of the Commissioner of Baseball announced Tuesday, April 5 that Milwaukee Brewers catcher Pedro Severino has received an 80-game suspension without pay after testing positive for Clomiphene, a performance-enhancing substance, in violation of Major League Baseball’s Joint Drug Prevention and Treatment Program.

If you've seen Learic Davis play, his splashy dunks will catch your attention. Lily Zhao goes Beyond the Game with the senior, who showcased his talents on a national stage.