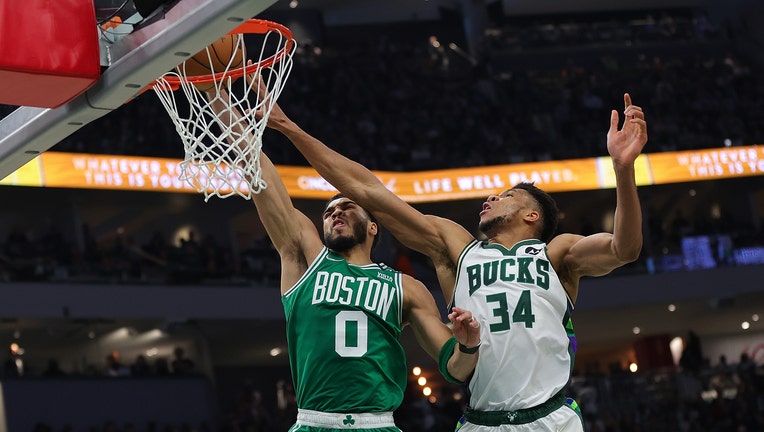 Jayson Tatum of the Boston Celtics is fouled by Giannis Antetokounmpo of the Milwaukee Bucks during Game 3 of the Eastern Conference semifinals at Fiserv Forum on May 07, 2022. (Photo by Stacy Revere/Getty Images)

MILWAUKEE - Giannis Antetokounmpo found a way to get better shots and recapture his peak form just in time to help the defending champion Milwaukee Bucks regain the lead in the Eastern Conference semifinals.

But it was the Boston Celtics’ bad timing that made the difference in the end.

Antetokounmpo bounced back from a rare subpar performance by scoring 42 points and making the go-ahead basket with 44.3 seconds left in a 103-101 victory Saturday. The Bucks lead the best-of-7 series 2-1, with Game 4 on Monday night in Milwaukee.

"I saw Al tip it, and I saw the red outline go off on the backboard," Bucks center Brook Lopez said. "It was very close."

Boston trailed 103-100 when officials determined Marcus Smart was fouled by Jrue Holiday just before attempting a potential tying 3-pointer with 4.6 seconds remaining. Because it was a non-shooting foul, Smart got just two free-throw attempts.

Smart made the first free throw, then missed the second intentionally — flinging a shot that went hard off the backboard before hitting the rim.

That’s when things got wild.

"Missed it perfectly," Smart said. "Nobody was ready, (but) our guys were. Got it up on the rim. We had a few chances at it. Just didn’t work out for us."

The Celtics believed Smart should have had an opportunity to tie the game at the line. Celtics coach Ime Udoka and Smart said it should have been a shooting foul on Holiday.

"You can clearly see it," Udoka said. "I saw it in person, but also on the film. I just went and looked at it. It's a shot. He's curling into his shot. He's getting fouled on the way up. Bad missed call."

"Honestly, it looked like he was still facing the sideline," said Holiday, who scored 25 points. "That's not a shooting motion. He wasn't facing the rim."

Jaylen Brown led the Celtics with 27 points and 12 rebounds. Horford had 22 points, 15 rebounds and five assists.

Boston trailed by 14 late in the third quarter and was facing a 13-point deficit with less than 10 minutes left before storming back. The Celtics pulled ahead 100-99 and took their first lead since early in their third quarter on Brown’s two free throws with 1:49 remaining.

Both teams failed to score on their next possessions before Antetokounmpo put the Bucks back ahead. Antetokounmpo then blocked Brown’s driving layup attempt, leading to Holiday's basket that made it 103-100 with 11.2 seconds remaining.

It was a major upgrade from his Game 2 outing, when he went 2 of 12 and scored just five points in the first half before finishing with 28 in the Bucks’ 109-86 loss.

Antetokounmpo made sure the Bucks weren't thrown off course in their title defense.

On a day when Brown and Horford both produced double-doubles, the Celtics still lost in part because of All-Star forward Jayson Tatum's struggles. Tatum shot 4 of 19 overall and missed all six of his 3-point attempts before finishing with 10 points.

Tatum said his left wrist was bothering him but added that it didn't impact his play.

"I was probably thinking a little bit too much," Tatum said. "It all comes down to I’ve got to make better reads."

Celtics: Robert Williams went to the locker room in the third quarter after taking an elbow to the face from Milwaukee's Bobby Portis as they tangled under the basket while pursuing the ball. Williams returned later in the third. ... Reserve forward Sam Hauser, who had played two minutes in each of the series’ first two games, was unavailable Saturday due to an injured right shoulder. Udoka said Hauser took a fall in practice. "He’ll be OK long-term," Udoka said. "It’s just something where he could be out a few weeks based on that." ... The Celtics lost despite having a major edge at the foul line. The Celtics were 28 of 33 and the Bucks 14 of 17 on free-throw attempts.

Bucks: Reserve guard George Hill played for the first time this postseason after recovering from a strained abdominal muscle. ... Grayson Allen made his first career playoff start and Portis moved into a bench role. ... The Bucks overcame a major free-throw disparity. The Celtics were 28 of 33 and the Bucks 14 of 17 on free-throw attempts. ... Lopez had 13 points and 10 rebounds. He had totaled eight points in the first two games of this series.