MILWAUKEE - The City of Milwaukee and Milwaukee Bucks revealed on Wednesday, July 21 plans for the parade to celebrate the Bucks' NBA Championship.

The parade will take place through downtown Milwaukee Thursday, July 22, beginning at 11 a.m. Players, coaches, owners, alumni, and staff will take part in the parade, which will begin at the intersection of E. Wisconsin Avenue and N. Prospect Avenue. The parade will then proceed west on E. Wisconsin Avenue before turning north onto N. Water Street. From there, the route will continue on N. Water Street to E. Knapp Street before ending on E. Knapp Street at the Milwaukee River.

Take a look at the route for the Bucks championship parade.

The stage will be set up on the north side of Block 6 near the intersection of Fifth Street. and McKinley Avenue, with viewing areas and screens set up throughout Deer District. The anticipated start time of the championship celebration is 12:30 p.m. 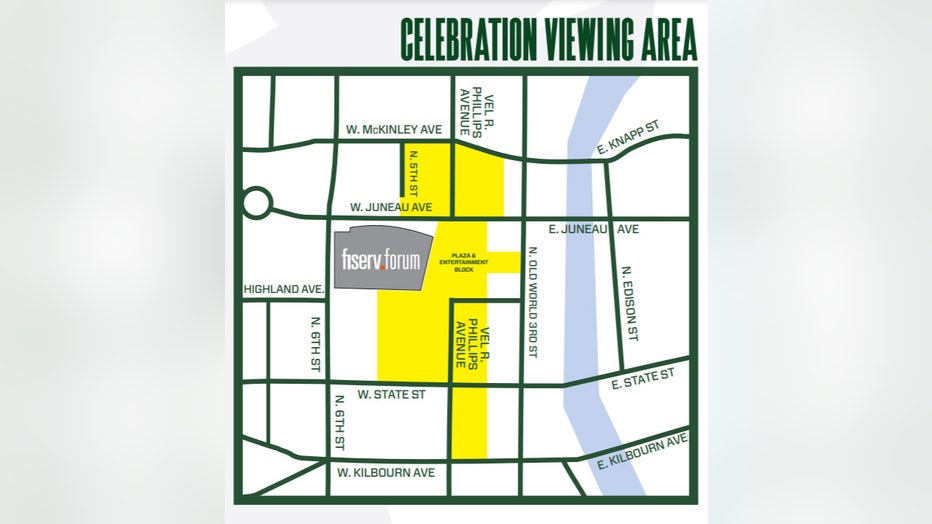 Parade watchers are asked not to camp, place furniture, or reserve spaces along the parade route during the overnight hours prior to the event.

Bucks offer information on championship parade and celebration in Milwaukee

The Milwaukee Bucks offered more information on the championship parade and celebration set for Thursday in Milwaukee.

Street closures and parking restrictions will be in place. Everyone is encouraged to pay careful attention to the posted signs and directions from city officials.

For people driving downtown, good information about parking options is available at parkmilwaukee.com.

Milwaukee Mayor Tom Barrett spoke with reporters on Wednesday afternoon and said the parade is for everyone. He encouraged people to wear masks – he does not want this to be a super spreader event.

"We've seen a pretty dramatic increase in COVID positivity rate over the last couple of weeks. So that is a concern, particularly with this new strand that is out there -- this Delta strand," the mayor said.

The details of an NBA Championship parade are still being worked out. But Milwaukee Mayor Tom Barrett said everyone is invited.

The mayor emphasized the city wants this to be a day of celebration.

"We're asking people to come, to celebrate responsibly. We don't want to get in the headlines for the wrong reasons – and we don't want to anybody to get hurt," Barrett said.

In addition to the streets on the parade route, the following streets will be closed as early as 8:00 a.m.

An effort will be made to ensure cross streets intersecting with the parade route remain open to vehicle traffic as long as possible.

Service on The Hop will be maintained throughout the day, though minor delays may be possible given the crowds downtown and the parade crossing the route. Riders are encouraged to follow @HopAlerts on Twitter to be notified of any delays and track the vehicles in real time utilizing the streetcar’s real-time route map at https://thehopmke.com/interactive-map/ or the free TransLoc app (available via the App Store or Google Play).

These street closures will impact multiple MCTS bus routes that operate in downtown Milwaukee. Passengers should visit RIDEMCTS.com/Alerts for information about detours.

"NO PARKING – TOW AWAY ZONE" signs are currently being posted. Vehicles must be moved to ensure safety. All vehicles parked in violation will be ticketed and towed. If your vehicle is towed, please call (414) 286-2700 for more information. Additional information on reclaiming and payment is at milwaukee.gov/Towing.

Metered parking locations throughout the city and contactless payments are available on the MKE Park app available for free download on iPhone and Android devices. Another resource is available parkmilwaukee.com which provides a list of parking lots and structures.

Fans lining up to get Bucks championship gear

Brian Kramp spent the morning at Dick's Sporting Goods in Wauwatosa with a look at the merchandise.