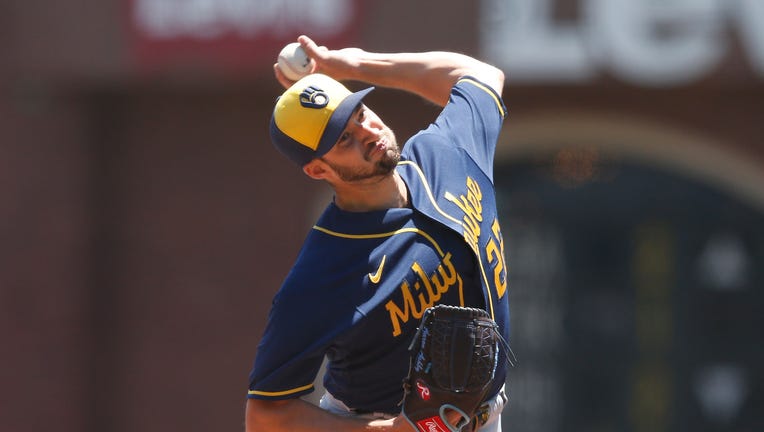 Aaron Ashby of the Milwaukee Brewers pitches against the San Francisco Giants at Oracle Park on July 17, 2022 in San Francisco. (Photo by Lachlan Cunningham/Getty Images)

SAN FRANCISCO - Logan Webb pitched six strong innings for his ninth win to keep the Giants rolling into the All-Star break with a 9-5 victory over the slumping Milwaukee Brewers on Sunday.

LaMonte Wade Jr. hit a three-run home run. Brandon Belt also connected and drove in three runs as the Giants won their third straight against the Brewers after dropping the series opener.

San Francisco has won seven of nine overall heading into the All-Star break after losing 14 of its previous 18.

The NL Central-leading Brewers are heading in the opposite direction with their eighth loss in 11 games. Milwaukee’s division lead fell to a half game over St. Louis after the Cardinals were rained out against the Reds.

Webb (9-3) bounced back after Willy Adames’ 19th home run with one out in the first inning. Backed by a pair of double plays, Webb allowed two runs and four hits with five strikeouts.

Webb, who has a 1.35 ERA over his last three outings, left after walking Andrew McCutchen leading off the seventh. McCutchen scored on Hunter Renfroe’s double against Jakob Junis.

Belt had a two-out, broken-bat RBI single off Aaron Ashby (2-7) as a pinch-hitter in the second, then hit a two-run homer to right off Jason Alexander in the sixth.

Rowdy Tellez hit his 18th home run for Milwaukee in the eighth.

Milwaukee RHP Devin Williams was added to the NL All-Star roster for the first time in his career, replacing Braves pitcher Max Fried. Corbin Burnes and Josh Hader were also selected to the Mid-Summer Classic but will not play.

Brewers: C Alex Jackson was reinstated from the Injured List and optioned to Triple-A Nashville.

Brewers: Following a four-day break, Craig Counsell’s club begins a four-game series in Milwaukee against the Rockies on Thursday.

Giants: San Francisco heads to Los Angeles for a four-game series against the Dodgers beginning Thursday. The home team has won in the five previous games they’ve played this season.