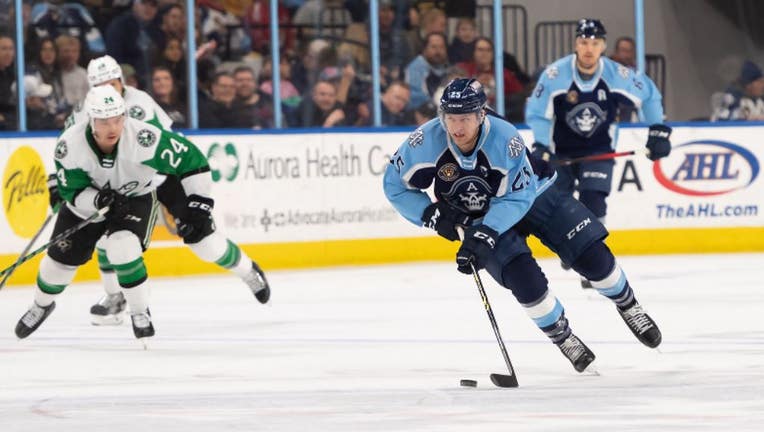 MILWAUKEE - Graham Knott scored the Admirals' lone goal as they saw their four-game point streak snapped in a 4-1 loss to the Texas Stars on Wednesday night at Panther Arena. The loss snapped a four-game point streak for the Ads, however, the team remains in third place in the division, thanks to a Rockford loss to Grand Rapids.

The Admirals surrendered a goal in each of the first two periods and could only muster a combined eight shots through the first 40 minutes of play. Ty Dellandrea got the Stars on the board at 8:22 of the first period with his 23rd goal of the season, while Jordan Kawaguchi made it 2-0 just over two minutes into the second when his shot deflected off a skate and by Ads netminder Connor Ingram.

In spite of the sluggish start, the Ads came out buzzing in the third period and upped their shot total by six within the first two minutes. They finally got one to drop when Knott picked up his  12th goal of the season at 8:42 of the third when he found a loose puck in front of the crease and lifted it past Texas goalie Matt Murray. Mathieu Olivier and Marc Del Gaizo earned assists on the play.

Unfortunately for Milwaukee that was all the offense they could manage in spite of tying a season-high with 22 shots in the final period.

Kawaguchi earned his second of the game with 4:25 left to play and they sealed it on a Curtis McKenzie empty-netter with under a minute to go.

Downtown Milwaukee car thefts and break-ins have been described by a Milwaukee police captain as an "epidemic," especially around Fiserv Forum, and MPD is increasing patrols to try to curb the problem.

The Milwaukee Brewers beat the Pittsburgh Pirates 4-2 Wednesday for a three-game sweep.

The cold and rainy weather forced the outdoor party in the Deer District to be canceled for Game 2 between the Milwaukee Bucks and Chicago Bulls Wednesday night, but it did not put a damper on any of the excitement.