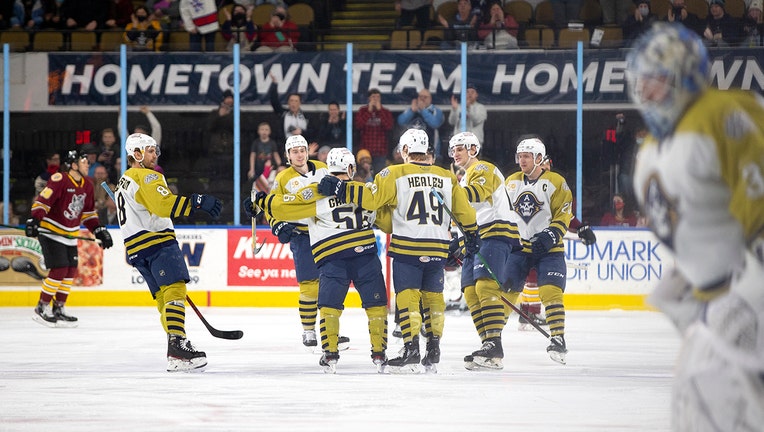 MILWAUKEE - The Milwaukee Admirals jumped out to a 5-1 first period lead and then held off a furious Chicago Wolves rally to take a 7-5 victory over their arch-rivals on Saturday night at UW-Milwaukee Panther Arena.

It was the first win of the season over the Wolves for Milwaukee in eight tries.

Marc Del Gaizo potted the game's first and last goals for his first two-goal game as a pro. Matt Luff notched a three-point night with a goal and two assists.

One night after a shutout loss to the Wolves to snap a seven-game winning streak, the Admirals set a season-high for goals in a period with five in the first. Del Gaizo got things rolling for Milwaukee with his fourth of the season 3:31 into the game and that was followed by goals from Rocco Grimaldi, Josh Healey, Graham Knott and Cole Smith in the next 14:06 to take a four-goal advantage into the locker room after the first period.

The goal for Healey was his first of the season and his first as an Admiral.

However, there was no quit in the Wolves as they scored two in the second; Ryan Suzuki scored 1:12 into sandwich frame, and then CJ Smith found the back of the net with just .2 seconds left to go to pull within two at 5-3.

Luff scored from between the wheels 40 seconds into the third period to make it 6-3, but the Wolves responded again with goals by Jesper Sellgren and a shorty from Jalen Chatfield to pull within one with 5:05 to play.

After some tense moments, which included the final 1:59 of 6-on-5 time for the Wolves, Del Gaizo finished things off as his empty net bid went 160 feet and trickled into the Chicago goal with under a second to play to bring the final score to 7-5.

In addition to Luff and Del Gaizo, Smith and Grimaldi also finished with multi-point nights. Eleven different Admirals found their way onto the scoresheet.

The Admirals are off for the next five days before hitting the road for two games in Texas next weekend. Milwaukee’s next home game is Wednesday, Feb. 16 when they host Rockford at 7 p.m.

A Fond du Lac resident survived after his truck broke through the Lake Winnebago ice on Saturday afternoon, the Fond du Lac County sheriff said in a Facebook post.

The Milwaukee Bucks have signed center Greg Monroe to a 10-day contract. Monroe played 165 games for the Bucks between 2015 and 2017.