Rich 'BD' Salgado talks about the NCAA's temporary name, image, likeness policy for student athletes with NewsNOW's Pilar Arias. The NCAA approved the interim 'NIL' policy, which means athletes will have the opportunity to earn money from endorsements, sponsorships, social media, and more as soon as July 1. All three NCAA divisions agreed to adopt the policy, the NCAA announced on Wednesday.

March Madness has become synonymous with the NCAA’s men’s basketball tournament, but that’s changing this season.

Beginning with the 2022 tournament, the NCAA will include the Division I women’s basketball tournament under its March Madness branding.

"Women's basketball has grown tremendously over the past several years, and we remain focused on our priority of enhancing and growing the game," said Lynn Holzman, vice president of women's basketball. "The brand recognition that March Madness carries will broaden marketing opportunities as we continue that work to elevate the women's basketball championship."

Details of how the March Madness brand will be incorporated into the women's tournament are still being developed. But according to a news release, the members of the Division I Women's Basketball Oversight Committee expressed their desire for substantial changes after the gender equity report on basketball championships was released Aug. 3.

"This is just the start when it comes to improving gender equity in the way the two Division I basketball championships are conducted," said Lisa Campos, chair of the NCAA Division I Women's Basketball Oversight Committee. "Adding the March Madness trademark to the Division I Women's Basketball Championship will enhance the development and public perception of the sport, and the oversight committee looks forward to its work to address other recommendations through the governance structure to continue those efforts."

The NCAA came under heavy criticism this spring after players posted the drastic difference in facilities and accommodations offered to male and female athletes at the NCAA Tournaments.

Stanford sports trainer Ali Kershner posted contrasting images on Instagram Thursday, showing a weight room setup in Indianapolis for the men's basketball athletes, and then showing a single rack of dumbbells provided for the women playing in San Antonio.

Sedona Prince, an athlete for the University of Oregon, shared a video comparing the weight rooms on her TikTok and Twitter accounts. 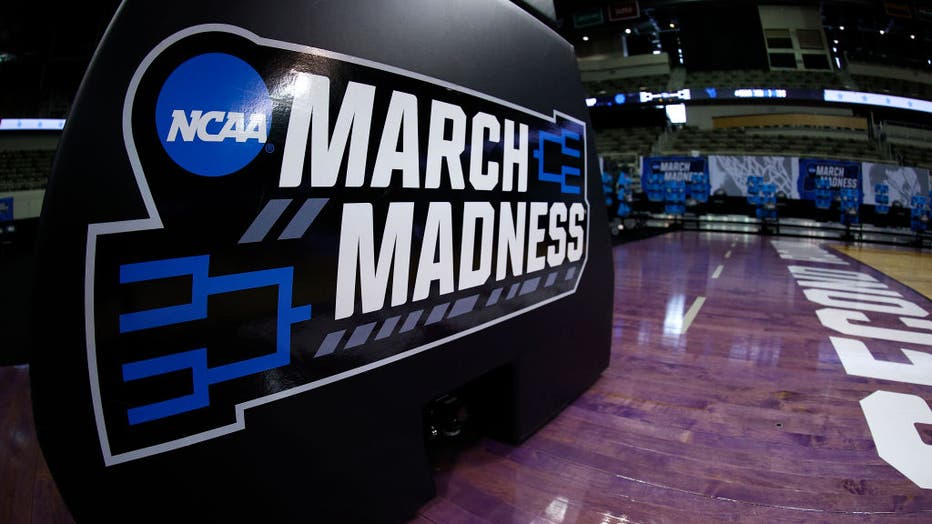 The NCAA March Madness logo is seen on the basket stanchion before the game between the Oral Roberts Golden Eagles and the Florida Gators in the second round game of the 2021 NCAA Men's Basketball Tournament at Indiana Farmers Coliseum on March 21, 2

"I saw the story today, I saw the photos of the two respective weight rooms, and yeah it was really ridiculous," Warriors' coach Steve Kerr said. "I hope that the NCAA is clearing that up right away and giving the women the facilities that they deserve."

"When we don't meet the expectations of that support, that's on me and for that I apologize to the women basketball student athletes, to the coaches, to the women's basketball committee for dropping the ball frankly on the weight room issue in San Antonio," Dan Gavitt, NCAA vice president of basketball, said.