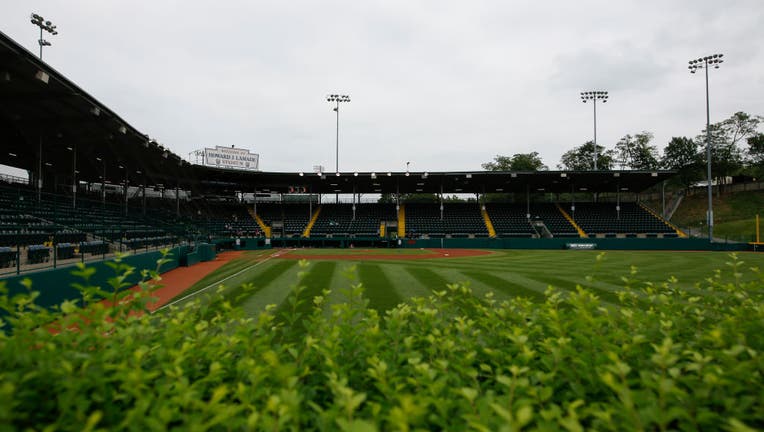 WILLIAMSPORT, PENNSYLVANIA - AUGUST 29: A general view of the stadium before the 2021 Little League World Series game between Team Michigan and Team Ohio at Howard J. Lamade Stadium on August 29, 2021 in Williamsport, Pennsylvania. (Photo by Joshua B

WILLIAMSPORT, Pa. - A player in the Little League World Series is now recovering after the team said he fell from a bunk bed.

According to FOX 13, the Snow Canyon Little League coach said 12-year-old Easton Oliverson suffered a serious head injury while sleeping at the barracks at Williamsport, Pennsylvania, where the tournament is currently being held.

Oliverson was airlifted to a nearby hospital where he underwent surgery and was labeled in critical condition.

St. George News reported Easton suffered fractures to his skull and cheekbone with bleeding between the inside of his skull and the outer covering of the brain.

RELATED: Little Leaguer comforts pitcher who hit him in helmet with pitch

"He went through pretty traumatic surgery to get to where he’s at, but the doctors are all really positive," Spencer Beck, Oliverson’s uncle, told the Salt Lake Tribune. "All of the steps moving forward have been good so far."

The Utah-based team is scheduled to play in the tournament Friday.

"Terrible news. Our prayers are with this player, family and team today," Governor Spencer Cox tweeted on Monday.

According to Nationwide Children’s Hospital, an average of 36,000 bunk bed-related injuries occur every year to children in the U.S.

The hospital says safety tips include installing guardrails and making sure children younger than 6 do not sleep on the top bunk.