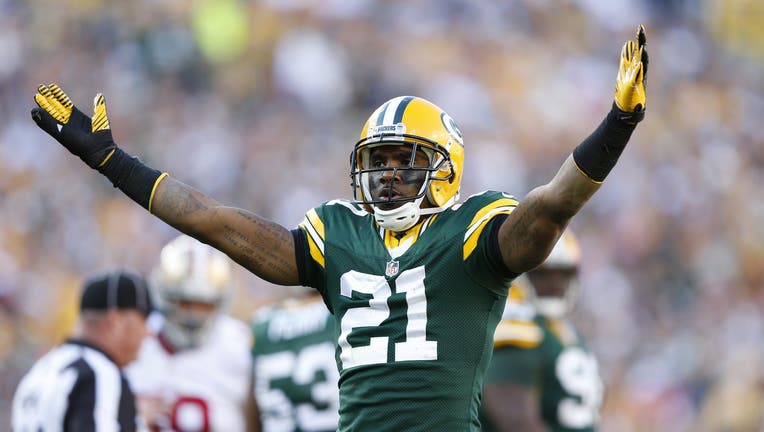 Charles Woodson celebrates after a tackle against the San Francisco 49ers during a game at Lambeau Field on September 9, 2012. (Photo by Joe Robbins/Getty Images)

CANTON, Ohio - Peyton Manning, Charles Woodson and Steve Hutchinson, inducted into the Pro Football Hall of Fame in August, will receive their rings of excellence in a pair of celebrations each this season.

Woodson's ring will be presented first on Nov. 14 when Las Vegas hosts Kansas City. He also will be recognized two weeks later in Green Bay when the Rams visit. Woodson won a Super Bowl with the Packers.

Former Commissioner Paul Tagliabue will be recognized at Green Bay on Dec. 12 when the Bears are in town.

All 19 living members of the classes of 2020 and 2021 will be part of such ceremonies, with Manning the focal point in Indianapolis on Sept. 19 when the Colts host the Rams, and on Oct. 31 when the Broncos host Washington. Manning won Super Bowls with Indianapolis and Denver.

Hutchinson will be honored in Seattle on Oct. 7 when the Seahawks play the Rams, and on Oct. 31 when the Vikings are home for the Cowboys. Hutchinson starred at guard for the Seahawks and Vikings.

Also receiving his ring with Manning on Sept. 19 will be Edgerrin James.

The next week, Calvin Johnson gets his when the Lions host the Ravens, while former Raiders coach Tom Flores will be recognized when Las Vegas hosts Miami in Sunday games. The next night, when Philadelphia visits Dallas, former Cowboys Cliff Harris, Drew Pearson and Jimmy Johnson will receive rings.

Four Hall of Famers from the Steelers get theirs on Oct. 17 when Seattle is at Pittsburgh: Troy Polamalu, Bill Cowher, Alan Faneca and Donnie Shell. That same day, with the Raiders at Denver, former Broncos safety Steve Atwater will be honored.

Another Oct. 31 ceremony will see Jimbo Covert get his ring when the Bears host the 49ers.

Isaac Bruce receives his ring the next Sunday when the Rams are home for the Titans. On Nov. 22, John Lynch will be given his ring as Tampa Bay hosts the Giants.

Harold Carmichael receives his ring on Dec. 19 when the Eagles are home against Washington.

Milwaukee Bucks President Peter Feigin spoke at a Milwaukee Press Club luncheon about the NBA Finals and the offseason as reigning champions.

Green Bay’s Elgton Jenkins has spent his NFL career demonstrating he can thrive at just about every spot on the offensive line.