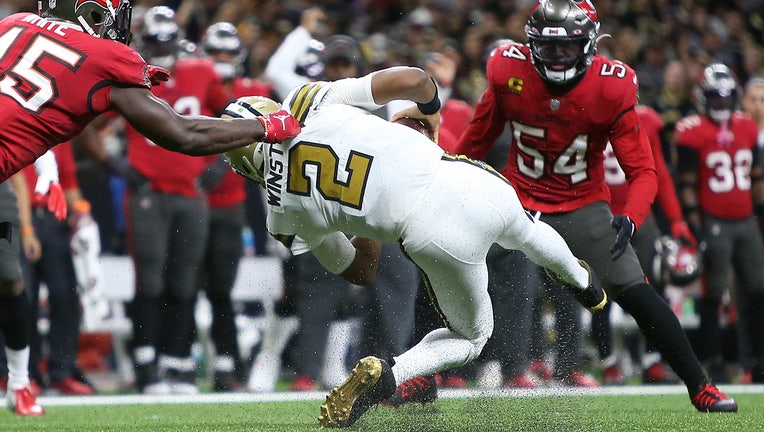 NEW ORLEANS, LOUISIANA - OCTOBER 31: Jameis Winston #2 of the New Orleans Saints is injured after being tackled by Devin White #45 of the Tampa Bay Buccaneers during the second quarter at Caesars Superdome on October 31, 2021 in New Orleans, Louisian

Payton confirmed the extent of the injury, first reported by the NFL Network, following an MRI that showed a torn anterior cruciate ligament and damage to the medial collateral ligament in Winston's left knee.

Winston was injured early in the second quarter of New Orleans' 36-27 victory over Tampa Bay on Sunday. On the play, Winston was scrambling when he was pulled down from behind by linebacker Devin White, who was penalized for a horse-collar tackle.

Winston's knee buckled as he went down. He was unable to walk off the field without help and was replaced by Trevor Siemian for the rest of the game.

Winston had been 4-2 in six complete games as a starter and his 16-yard touchdown pass to Tre'Quan Smith on Sunday had tied the game against Tampa Bay at 7. That was also the score when he left the game.

Siemian was the primary backup against the Bucs because Hill was still recovering from a concussion against Washington in Week 5. Payton said Hill's condition was progressing well, but declined to say whether Hill had been cleared to return to practice this week.

Even if Hill is back against the Atlanta Falcons on Sunday, Payton declined to say how he'd approach deciding whether to give Siemian a chance to pick up where he left off, or install Hill, who went 3-1 as a starter last season while Drew Brees was sidelined with rib and lung injuries.

"This is going to be the $6 million question and honestly we going to look closely at what's best for our team in this game" against Atlanta, Payton said. "As the week progresses we'll see how we want it to play it out."

Winston came to the Saints as a reserve to learn from Payton and Brees in 2020, after the Buccaneers allowed him to go into free agency so they could replace him with Tom Brady.

While the Buccaneers drafted Winston first overall in 2015, he was a mercurial performer early in his career, often canceling out highly productive stints with costly mistakes.

In New Orleans, Winston had focused on improving his coverage reads and decision-making, and his 14 touchdown passes against just three interceptions this season -- not to mention his winning record as a starter -- indicated he was making progress on that front.

"We definitely were encouraged. We felt like, man, we'd seen the arm strength, the leadership, all of those things," Payton said. "He was someone that had become a vital part to what we were doing."

Now his NFL future is less certain again. He was under just a one-year contract with New Orleans, turns 28 on Jan. 6, and is slated to end the league year as a free agent in the midst of rehabilitating from reconstructive knee surgery.