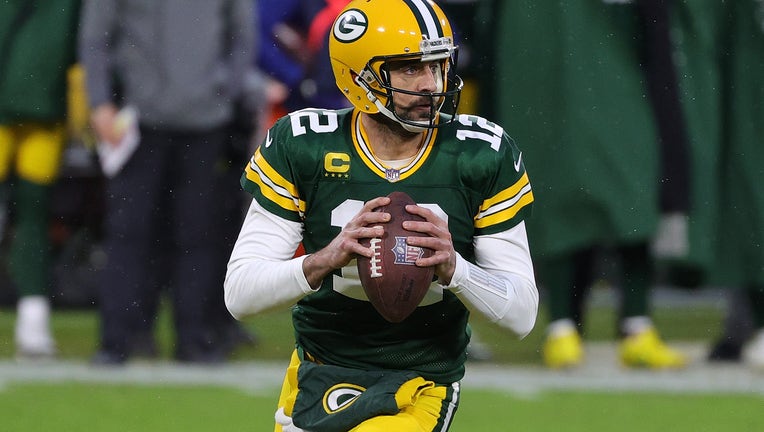 GREEN BAY, WISCONSIN - JANUARY 16: Aaron Rodgers #12 of the Green Bay Packers looks to pass against the Los Angeles Rams during the NFC Divisional Playoff game at Lambeau Field on January 16, 2021 in Green Bay, Wisconsin. The Packers defeated the Ram

Amid recent talk that Rodgers may soon be leaving town – or even retiring from the NFL – one local restaurant is making its pitch to keep Rodgers right where he is.

Mr. Brews Taphouse says it will provide Rodgers and fiancée Shailene Woodley with free food and beer for life if Rodgers finishes his career as a Packer.

"Seriously, we can’t let Aaron go," Mr. Brews founder and CEO Steve Day said in a news release, according to the Green Bay Press Gazette. "No way, no how. Not only is he coming off yet another MVP season but he is the face of our beloved franchise."

Rodgers signed a four-year contract extension with the Packers for $134 million in August 2018 but Day said his restaurant chain wasn’t able to go much farther than the free food-and-drink offer.

"We can offer him and Shailene a delicious meal and great brews whenever they like," Day said. "Come on, Aaron, please stay."

Rodgers, 37, is a California native who has been with the Packers since 2005, leading the team to a Super Bowl title in February 2011 and winning three league MVP awards.

But Rodgers reportedly became upset with team general manager Brian Gutekunst following the release of receiver Jake Kumerow after the 2019 season and with the drafting of Jordan Love in 2020.

Reports of Rodgers wanting out of Green Bay have attracted criticism, including from retired Pittsburgh Steelers legend Terry Bradshaw.

Rodgers "should just retire," Bradshaw said during a recent radio appearance, adding that Rodgers allegedly being upset about team management decisions made him look "weak."

Day of Mr. Brews Taphouse is hoping that the way to Rodgers’ heart is through his stomach.

The Green Bay Packers are exploring QBs they can add to their roster for organized team activities and training camp.