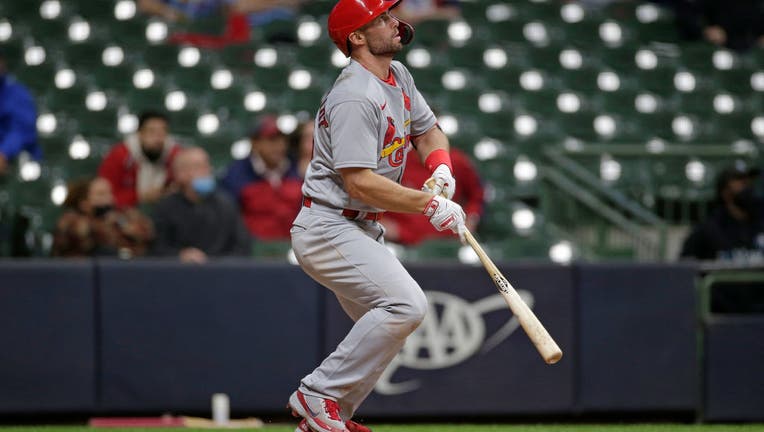 MILWAUKEE, WISCONSIN - MAY 11: Paul Goldschmidt #46 of the St. Louis Cardinals hits a two-run home run in the 11th inning against the Milwaukee Brewers at American Family Field on May 11, 2021 in Milwaukee, Wisconsin. (Photo by John Fisher/Getty Imag

MILWAUKEE - Once the St. Louis Cardinals finally started hitting, they refused to stop.

Paul Goldschmidt and Tyler O’Neill homered off Brad Boxberger in the 11th inning to help the Cardinals beat the Milwaukee Brewers 6-1 on Tuesday night for their fourth straight victory.

St. Louis has won 10 of its last 12 and is tied with San Francisco for the best record in the majors. The Cardinals won this one despite mustering just two hits in the first 10 innings.

"Just the identity of this team, starting with the coaching staff and trickling down to the players, obviously, is just that relentless effort and just going out there and playing until the umpire says there's no more baseball," said Harrison Bader, who scored the tying run in the eighth inning.

Goldschmidt broke a 1-all tie when he sent the first pitch he saw from Boxberger (0-1) well over the wall in left-center field for a two-run blast.

After Nolan Arenado doubled and Andrew Knizner was hit by a pitch, O’Neill delivered a three-run shot.

"Box has been really good for us and really valuable for us," Brewers manager Craig Counsell said. "He just had an off night."

With each team starting extra innings with a runner on second base under the format Major League Baseball adopted last year, Goldschmidt said it's imperative for visiting teams to stack as many runs as possible rather than settling for one or two.

"One is obviously good, but you almost assume that the other team’s going to score one run," Goldschmidt said.

The Brewers wasted a brilliant effort from starter Freddy Peralta, who struck out eight and gave up just one hit and one walk in seven shutout innings.

Reyes struck out Tyrone Taylor in the 10th to strand runners on third and second. The Brewers loaded the bases with one out in the 11th, but Reyes struck out Jackie Bradley Jr. and Billy McKinney to end the game.

After Peralta shut them down, the Cardinals tied the game in the eighth by snapping reliever Devin Williams’ string of six consecutive scoreless appearances.

The Brewers broke a scoreless tie in the sixth off Cardinals starter Kwang Hyun Kim when Lorenzo Cain hit a leadoff double and scored on Travis Shaw's ground-rule double.

Kim struck out six, walked one and allowed five hits in 5 1/3 innings.

The latest sign that things are slowly returning to normal at American Family Field came with the return of the famed sausage races midway through the sixth inning.

For the first month of this season, a recording of the sausages racing outside the stadium would air on the video board. The sausages (actually, people dressed in costumes representing a hot dog, Polish sausage, Italian sausage, bratwurst and chorizo) were once again racing inside the ballpark Tuesday night.

Brewers officials also announced that as of Saturday they would start allowing fans to fill half of American Family Field’s seating capacity, rather than the current maximum of 25%.

Brewers: RHP Corbin Burnes will get activated from the injured list in time to start the final game of this series Thursday. Burnes has a 1.53 ERA with 49 strikeouts and no walks through 29 1/3 innings this season.

The Brewers haven’t specified why Burnes went on the injured list.

LHP Brent Suter was reinstated from the bereavement list Tuesday. Counsell said RHP Eric Lindblom (knee) will probably be activated later this week and C Omar Narváez (hamstring) should get activated at some point during this six-game homestand.

John Gant (2-3, 2.15) starts for the Cardinals and Brandon Woodruff (2-1, 1.73) pitches for the Brewers as this three-game series continues Wednesday.

It's an issue that's being debated in just about every Wisconsin school district, sometimes more passionately than others. It's the question of how students can safely learn in person and for how long they need to wear masks to do so.

Many people are hoping to hit the pools and beaches in Milwaukee County this summer. But a staffing shortage may prevent that from happening.