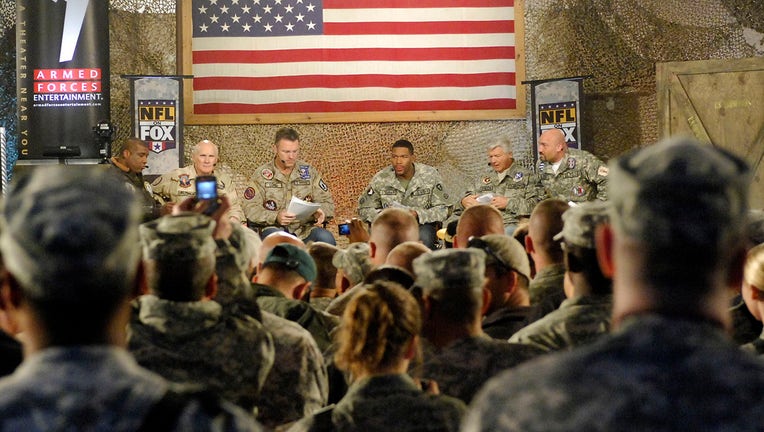 Fox's NFL pregame show is going international for the first time in 13 years for the annual Veterans Day show.

This week's "Fox NFL Sunday" will originate from Al Udeid Air Base in Qatar. The last time the pregame crew went outside the United States was 2009, when the show was at Bagram Airfield in Afghanistan.

"It is our favorite show of the year and one of the cool things I hear from people, even this week, is that viewers also tell me it is their favorite show," said "Fox NFL Sunday" host Curt Menefee. "It means a lot to the people. One of the things I remember from when we did 2009 was that it meant so much to the troops there because I think they feel forgotten when they're on the other side of the world."

The show — which also includes Terry Bradshaw, Howie Long, Michael Strahan, Jimmy Johnson and Jay Glazer — has originated from service academies two of the past three years. It was at the U.S. Naval Academy in Annapolis, Maryland, last year and U.S. Military Academy in West Point, New York, in 2019.

The two-hour program, which will begin at 11 a.m. EST, will spotlight the 75th anniversary of the Air Force featuring General Charles Q. Brown Jr. It will include features on Hall of Fame coach Tom Landry and former Dallas Cowboys defensive back Chad Hennings.

Landry, who passed away in 2000, flew B-17 Bomber missions during World War II before his playing and coaching career. Hennings graduated from the Air Force Academy and was drafted in the 11th round by the Cowboys in 1988, eventually being a part of three Super Bowl teams during a nine-year career.

Glen Powell of "Top Gun: Maverick" will narrate the show's opening at the top of the first and second hours.

Qatar is eight hours ahead of New York, meaning the show will take place during the evening.

The program will serve as an unofficial kickoff to Fox's coverage of the FIFA Men's World Cup, which begins Nov. 20. U.S. coach Gregg Berhalter and lead FOX analyst Alexi Lalas will make appearances.

"From a company standpoint, having everybody kind of together is big," said Fox Sports EVP Bill Wanger. "I don’t think there’s anything that as a group we’re more proud of."

Fox has the doubleheader on Sunday, with the featured game of the Dallas Cowboys at the Green Bay Packers.

Editor's note: This television station is owned by FOX.