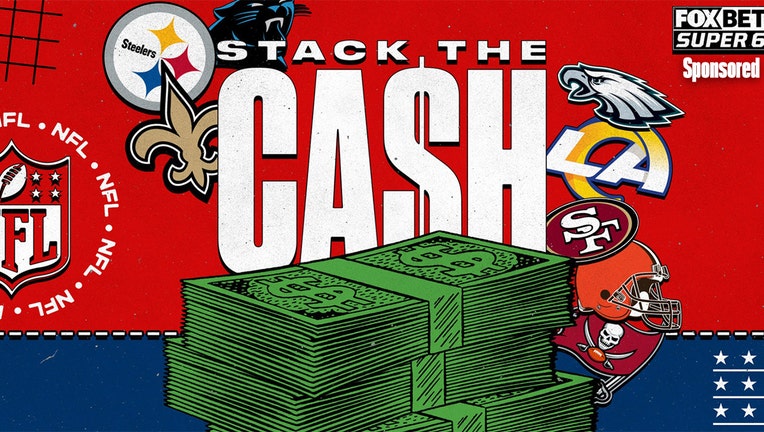 We're nearing the midway point of this turbulent 2021 NFL season, and Week 8 offers up a chance for NFL fans to win big in a brand new way.

That's right — FOX Bet Super 6 is bringing its "Stack the Cash" promotion to the NFL starting this week!

You still just download and open the FOX Bet Super 6 app, then enter the Sunday NFL Challenge and predict who will win each of six games and by how many points. But the awesome new wrinkle is that the jackpot, which started the week at $100,000, keeps climbing as more and more people enter the contest.

All you have to do is download the FOX Bet Super 6 app, enter Sunday's NFL Challenge and predict which teams will win and by how many points in six of Sunday's games. If you're right, you could win this week's "Stack the Cash" jackpot and join the list of FOX Bet Super 6 winners who have claimed more than $5 million in prizes.

Then, once you've entered — or if you already have — keep spreading the word! Remember, every new entry helps grow the overall prize pool. So if your friends, family and neighbors keep joining the contest, that means a bigger prize for all of you to potentially win, even after your picks are locked in. So download and play today!

To help you get to the pay window, here are my thoughts on this week's FOX Bet Super 6 games, with all NFL odds via FOX Bet.

The return of Houston QB Tyrod Taylor muddies this handicap because the drop-off from the veteran to rookie Davis Mills is worth at least a field goal. Taylor beat Jacksonville in the opener and left the Week 2 game against Cleveland tied at 14. If he’s a go — and it looks like he is — the Texans should have success moving the ball against a shaky defense that just gave up 415 yards to the winless Lions.

That being said, Houston’s defense was abysmal for the final three quarters against the Cardinals, letting four different pass catchers accumulate 50-plus yards receiving. The Rams have as good of a fleet of receivers, led by Cooper Kupp, who paces the NFL in receptions and yards. The Texans have the fewest blitzes (30!) in the NFL so far, and I don’t expect them to suddenly dial up pressure against Matt Stafford a week after he torched the Lions when blitzed (10-of-11, 142 yards, three touchdowns).

If you’re wondering if this is maybe a letdown spot, the Rams do have a big non-conference game against the Titans next week, which is a potential Super Bowl preview.

The 49ers are a mess, with Kyle Shanahan not sounding confident about Jimmy Garoppolo after a two-interception disaster in the middle of a bomb cyclone on Sunday night. The 49ers offense is atrocious without tight end George Kittle, as Deebo Samuel is the only playmaker on the outside. If the run game is bottled up and the Bears focus on Samuel, the 49ers will really struggle to move the ball, which is why this total has been bet down by three and a half points already (from 43 to 39.5).

Chicago’s head coach Matt Nagy tested positive for COVID, but Bears fans almost universally say this might help jump-start a conservative offense. QB Justin Fields has understandably struggled badly versus aggressive defensive fronts like Cleveland and Tampa (sacked 13 times combined, zero touchdowns). But against lesser defenses, he’s much more confident, even as a game manager, beating the Raiders on the road despite throwing for just 111 yards.

The 49ers' run defense statistically is a top-10 unit, but it did struggle to contain Jonathan Taylor (18 rushes for 107 yards and a touchdown) Sunday. Nobody runs on Tampa, but rookie Khalil Herbert did manage 100 yards on 18 carries, a sign the offensive line has improved run-blocking.

How healthy are the Browns? Tough to know mid-week, but even if Case Keenum starts in place of Baker Mayfield, they’re still on the right side here.

Just because they had a bye week, remember: The Steelers offense is not good. The season-opening win over Buffalo is looking more and more fluky. Still, their three losses are to division leaders (Raiders, Bengals, Packers) with a combined record of 16-5. Mike Tomlin last lost a game off a bye week in 2016, and historically he has thrived in the role of an underdog, where he’s 2-1 this season with a tough non-cover in Green Bay. If the Steelers run defense wins at the line of scrimmage, where will the Browns offense come from?

You could probably say this every week, but Odell Beckham is worth watching, given that his last touchdown catch was 55 weeks ago. With Beckham trade talk swirling, this week has a boom-bust feel for the one-time star.

For a winless team, the Lions sure do try hard. And this might finally be the week they break through. After a dispiriting road loss to the Rams in which they covered the spread and pulled off an onside kick and converted two fake punts, the Lions step down in class to face a woeful Eagles team that can’t do anything right.

Philadelphia took a 7-0 lead on the Raiders last week, then the defense gave up 30 straight points on five consecutive possessions. The Eagles defense foolishly sat in a zone and didn’t blitz Derek Carr; he completed 90 percent of his passes - including 16 straight during one stretch - and he’s now on pace to break Peyton Manning’s single-season record for passing yards.

The Eagles blitz at the lowest rate in the NFL. Let’s see if they change things up given that Jared Goff’s biggest weakness throughout his career is against pressure. D’Andre Swift should be able to put together another 150 yards from scrimmage against a weak linebacker group from the Eagles, all of whom have been graded outside the top 55 (!) at the position.

But Jalen Hurts does stack fantasy garbage points with the best of them!

Atlanta is a completely different offense with rookie tight end Kyle Pitts involved. The Falcons went to London down their top two receivers, and Pitts caught nine passes for 119 yards. Even when the receivers returned, Pitts went for seven catches and 163 yards against Miami last week — the biggest receiving game for a rookie tight end in over 30 years.

Carolina has been league-average defending tight ends, but when they faced Dallas, Dalton Schultz and Blake Jarwin combined for 76 yards and two touchdowns on seven catches. If Shaq Thompson isn’t back from injury, Pitts could have another monster game.

The Falcons have won three of four, victories that came against the Giants, Jets and Dolphins (combined record: 4-16). But are the Panthers good? They’ve lost four straight, have a QB controversy and are still missing Christian McCaffrey, and Robby Anderson leads the NFL in drops. I hate laying points with the Falcons because this is the type of game they historically lose, but Atlanta feels like the right side.

PICK: Falcons to win by 4-7 points

Sunday features a rematch of a thrilling NFC playoff game in which the now-retired Drew Brees and the Saints turned the ball over four times and lost at home — after beating the Bucs soundly twice during the regular season.

Tom Brady played poorly in all three games, completing less than 60 percent of his passes in each, throwing five interceptions and getting sacked seven times. If he doesn’t get Antonio Brown and Rob Gronkowski back, this could be a tough one for him, because Mike Evans has struggled in recent years against Saints star CB Marshon Lattimore.

Just as the Saints were getting healthier off the bye, though, they have lost star guard Andrus Peat to a pec injury, and that’s suboptimal facing one of the best defensive fronts in the NFL. Todd Bowles and the Bucs' defense know Jameis Winston well from his time in Tampa, so expect them to blitz him heavily.

Winston, to his credit, has played better (13 TDs, 3 INTs) than expected and only has four turnovers this season. But the Bucs are by far the team that blitzes the most in the NFL, and the Saints don’t have receivers who can win 1-on-1.

PICK: Buccaneers to win by 8-12 points

Browns to win by 4-7 points

Falcons to win by 4-7 points

Buccaneers to win by 8-12 points