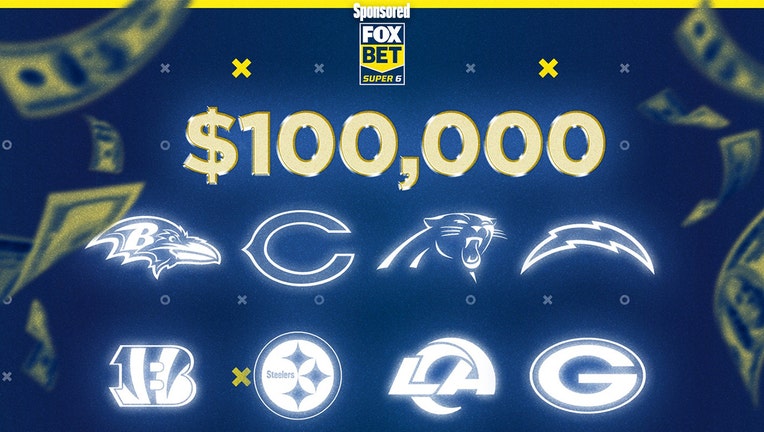 If it feels to you like the 2021 NFL season is flying by, you're not alone.

We're already to Week 6, and with every passing week, we get a better and better read on each team. Still, injuries and weather can throw your analysis for a loop, and Lady Luck is always looming to interject herself into the proceedings.

Perhaps Lady Luck will be on your side this week in the FOX Bet Super 6 NFL Challenge, where you have a chance to win $100,000 of Terry Bradshaw's money absolutely for free! All you have to do is download the FOX Bet Super 6 app (if you haven't already), enter Sunday's contest and make your picks on which team will win and by how many points in six NFL Week 6 games.

To help you get to the pay window, here are my thoughts on this week's FOX BET Super 6 games, with all NFL odds via FOX Bet.

Are the Bears good?

The record says 3-2, but the stats say otherwise. They’re dead last in net yards per play (-1.46) and got overwhelmed by two top teams (the Rams and Browns) on the road. Even if you toss out the Rams result, as Andy Dalton was the QB, the Bears don’t have one offensive lineman ranked in the top 10 at his position, RB David Montgomery is on IR, and, oh yeah – Aaron Rodgers and the Packers have dominated the Bears, winning four straight and nine of 10.

Chicago’s only edge is on the defensive line, where Robert Quinn and Khalil Mack can cause major problems for an overachieving group of several backups on the Packers OL. And Green Bay’s run defense has been terrible (29th in DVOA), masked only by the greatness of Rodgers (since the opener, anyway).

If the Bears can get an early lead and ride their backup running backs, maybe they can keep it close. Otherwise, Rodgers continues his dominance of his divisional foes.

PICK: Packers to win by 7-9 points

The Giants are walking wounded, and you’ll want to check injury reports all week on the many stars who might not suit up Sunday at home. Saquon Barkley (ankle) is definitely out, while QB Daniel Jones, WR Kenny Golladay and WR Kadarius Toney are all iffy. Toss in two other receivers, and you wonder how the Giants can score to keep up with the Rams. The Rams are third in net yards per play; New York is 17th.

It should be noted the Rams hosted the Giants last year as 13.5-point favorites and barely prevailed (17-9) without covering the spread. Sean McVay’s Rams have a tendency to play down to their opponents, going 0-4 in their last four against the spread versus a team with a losing record.

But New York has struggled big-time at home, including 0-2 ATS this year with two outright losses, and now they likely will have Mike Glennon at QB. This feels like a game where the Giants could come close to winning one for coach Joe Judge, who is on the hot seat … or they get blown out big time, sealing his fate.

This is one of the most important games of the week, as the loser has a massive uphill climb to the playoffs – and for Mike Zimmer, that could mean the end of his run in Minnesota.

Christian McCaffrey and Dalvin Cook are both expected to return from injury in what figures to be a low-scoring game with so much at stake. When the pressure has been on versus Dallas and Philadelphia, Sam Darnold has struggled in the second half, sorely missing C-Mac and forcing throws (tied for first in INTs under pressure with four). All six of Darnold’s interceptions this season have come since McCaffrey has been injured. Expect 30+ carries for Carolina and all of the check downs from Darnold to avoid mistakes.

The Vikings have been woefully inconsistent on offense this season, and last year against the Panthers needed 18 fourth-quarter points to rally at home for a last-minute victory. The matchup to watch will be Carolina CB Donte Jackson against elite WR Justin Jefferson (sixth in receptions, sixth in yards).

If Carolina LB Shaq Thompson returns, the Panthers should be able to do enough defensively to contain Cook again (18-61 last year, no carries over 15 yards) to win. They sorely missed their leading tackler in the middle trying to corral elusive QB Jalen Hurts last week in the red zone.

PICK: Panthers to win by 3-4 points

The unlucky Lions have lost two games on field goals of over 50 yards in the final seconds, both in domes. How much heartbreak can a team endure? Dan Campbell has the Lions fighting, but cluster injuries at WR and on the OL are taking their toll – the Lions already have seven starters on injured reserve.

The Bengals have fared well in the underdog role, with outright wins over the Vikings and Steelers. Being the favorite instead is a strange role for Cincinnati; we saw the Bengals nearly lose to the Jaguars two weeks ago as big favorites.

The Lions were lit up by Justin Jefferson last week (7 catches, 124 yards), and now face potential offensive rookie of the year in Ja’Marr Chase, who just torched the Packers. Yet the Bengals have had issues protecting Joe Burrow, as he took eight QB hits and three sacks against the Packers, and ended up in the hospital after the game.

The Bengals are the better team, there’s no question about that. But if the Lions are going to steal a win, this might be the spot to do it.

The Ravens, who are coming off a short week in which they needed late heroics (again!) to overcome a 22-3 deficit against the lowly Colts, have been very fortunate late to get wins against the Chiefs, Lions and Indianapolis.

LA’s lone loss was to the Cowboys, a game in which they didn’t punt but only went 1-for-4 in the red zone. They’re 4-1 and might be the best team in the AFC despite facing four teams that currently have a winning record.

Is the right team favored here?

This is LA’s first time seeing Lamar Jackson since the January 2019 playoff game in which the Chargers sacked Jackson seven times in an upset. LA went with six defensive backs to contain Jackson’s running speed, and it worked, resulting in an upset.

Jackson is a much better passer now, though, as evidenced by his 37-of-43, 442-yard effort against the Colts on MNF. He’s fourth in the NFL in yards per attempt, by far the best of his career. He’s been helped by emerging WR Marquise Brown (28 catches, 451 yards, 5 TDs).

PICK: Chargers to win by 1-2 points

Seattle went from being favored in this game with Russell Wilson to being considerable underdogs on the road with Geno Smith at quarterback. Wilson has covered up a lot of Seattle warts in his career. Two years ago at Heinz Field, Wilson was nearly perfect (29-of-35, 3 TDs) in a victory where Seattle rang up 425 yards of total offense. No shot Smith duplicates that.

And now Smith must face a Steelers defense that ranks fifth in pressure rate while being bottom 10 in the NFL in blitz percentage. Wilson was on pace to be sacked the most times in his career before the finger injury sent him to the sideline for about a month. That bodes poorly for Smith.

The 2021 Steelers aren’t very good, and have injuries of their own - WR JuJu Smith-Schuster is out for the season - but the offensive line played its best game of the season versus Denver. Rookie Najee Harris rushed for 122 yards, and it makes you wonder if the Seahawks are in big trouble here with a porous defense that got lit up last Thursday by the Rams offense (7.1 yards per play).

Desperate Seattle will probably move Jamal Adams into the box in an effort to create havoc, since he’s such a liability in coverage. He has generated 0 pressures and 0 QB hits in 2021 so far.

PICK: Steelers to win by 7-9 points

Packers to win by 7-9 points

Panthers to win by 3-4 points

Chargers to win by 1-2 points

Steelers to win by 7-9 points

Play FOX Bet Super 6 every week for your chance to win thousands of dollars, including a $10,000 prize on the Big Noon Kickoff game of the week, the $25,000 college football promotion and, of course, the weekly NFL Challenge. Just download the FOX Bet Super 6 app and make your picks today!