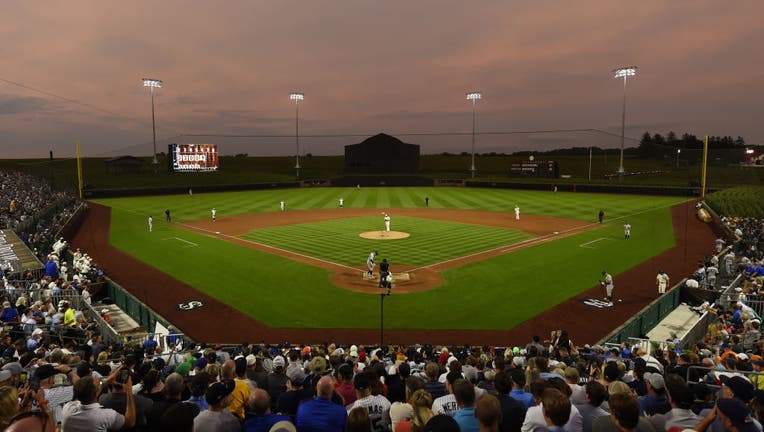 FILE - A general view of Field of Dreams as fans watch the Chicago White Sox play the New York Yankees on Aug. 12, 2021, at Field of Dreams in Dyersville, Iowa. (Photo by Ron Vesely/Getty Images)

After last year's smashing success, the Field of Dreams Game returns to Dyersville, Iowa, where the classic movie "Field of Dreams" was filmed.

The Chicago Cubs and the Cincinnati Reds will face off in this year's version of the game, which will take place Thursday night (7:15 p.m. ET on FOX and the FOX Sports app).

Here's everything you need to know about the second Field of Dreams Game.

What is the "Field of Dreams?"

The 1989 movie tells the story of Ray Kinsella (played by Kevin Costner) and his journey to building a baseball field in his cornfield in Iowa.

Kinsella hears a voice tell him, "If you build it, he will come," while standing in the cornfield. Seeing a vision of a baseball field, Kinsella is inspired to build a diamond right in the middle of his farm.

In addition to seeing the ghosts of former baseball players (including the White Sox's "Shoeless" Joe Jackson), Kinsella sees the ghost of his father, John. Kinsella rekindles the relationship with his deceased father by playing catch before a multitude of fans makes its way to the baseball diamond in the cornfield to watch baseball.

The New York Yankees and Chicago White Sox brought the "Field of Dreams" to life in 2021, with Costner and players on both teams walking through the cornfield and onto the diamond.

What time is the game? How can I watch?

The Cubs and Reds will square off on one of baseball's most unique diamonds Thursday at 7:15 p.m. ET on FOX.

Where is Dyersville? Who will be there?

Dyersville is a small town in northeast Iowa with 4,131 residents.

Like in 2021, a lottery exclusive to Iowa residents was created for tickets to attend this year's game. More tickets became available following the lottery in June.

As of Monday afternoon, the cheapest tickets available for resale are going for $692. The stadium has a capacity of 8,000 seats.

What to watch for …

The stadium for the Field of Dreams Game is surrounded by 159 acres of corn. A corn maze will lead fans attending the game from the movie site to the stadium.

Cubs and Reds players will get a police escort to the stadium. Once there, the players will enter the field like the players did in the movie, walking through the cornfield and the 16-foot removable fence in right field.

Reds first baseman and six-time All-Star Joey Votto will be mic'd up for the game. So will Cubs All-Star outfielder Ian Happ. Both will players will join the FOX broadcast from the field to have a conversation with announcers Joe Davis and John Smoltz during the game.

Both teams revealed their jerseys for the game Monday. The Cubs will wear a touched-up version of their late 1920s home uniforms with the navy caps they wore in 1914. Meanwhile, the Reds will wear the striped uniforms the team wore in 1919.

Get updates to this story on FOXSports.com.