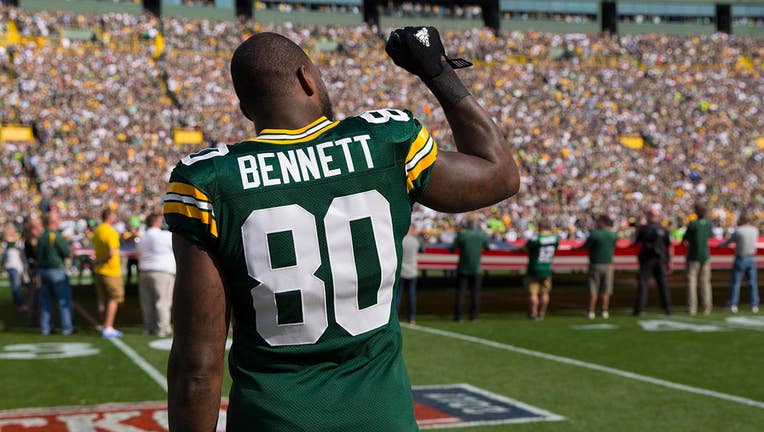 Green Bay Packers tight end Martellus Bennett #80 holds his fist in the air during the national anthem prior to the game against the Seattle Seahawks at Lambeau Field on Sept. 10, 2017. (Jeff Hanisch-USA TODAY Sports)

GREEN BAY, Wis. - Former NFL tight end and Super Bowl Champion Martellus Bennett said he received death threats and other "hateful messages" from Green Bay Packers fans after protesting the national anthem in 2017, something he claims was "tied" to his release from the team.

Bennett, 34, posted a number of tweets on Saturday expressing his belief that his short stint with the Packers came to an end in part because of his decision to protest the anthem.

"Packers fans were sending hate mail and leaving death threats and other hateful messages on the team voicemail because I was protesting," his tweet read. "It got so bad that Doug Collins, the head of team security, was worried something might happen to me in Wisconsin."

Bennett signed a three-year $21 million contract with the Packers in March 2017. He was released in November for failure to disclose a physical condition but Bennett claimed this was just a "loophole to get rid of" him. 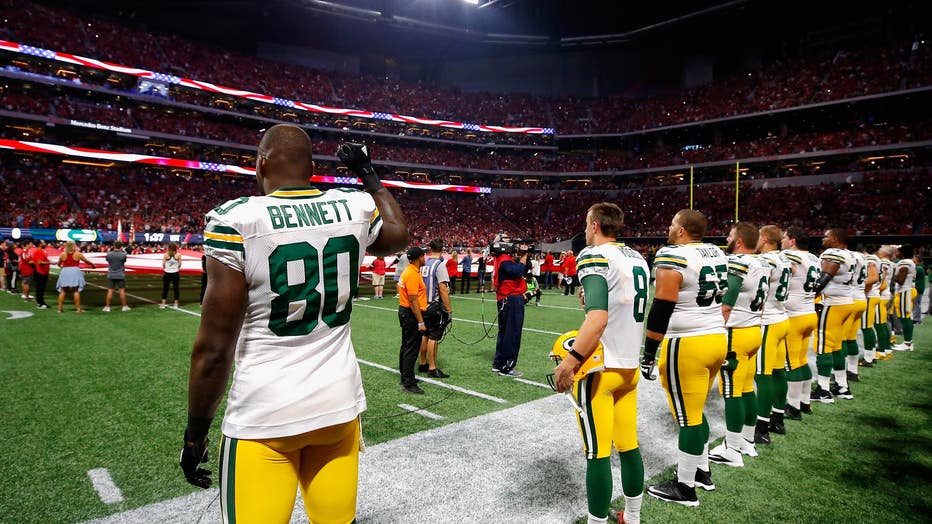 "In fact the entire situation to get me out of Green Bay was tied to protesting and the organization plotted to find a way to cut me and came up with some b---s--- lol."

Bennett claimed the head of security told him "Wisconsin wasn’t the place for protesting" and offered him alternative ways to protest.

"I was supposed to go on (injured reserve) 2 weeks before I was cut but they needed to come up with a plan to get rid of me with their lawyers," he said in one tweet. "The packers know what they did. I have all the details in my notebook starting in March of that year I started keeping a journal of all the f--- s--- that teams and coaches said and did after my time with the cowboys."

Washington at Green Bay for week 7

The 2-4 Washington Football Team visits Lambeau to take on the 5-1 Green Bay Packers at noon on FOX6.