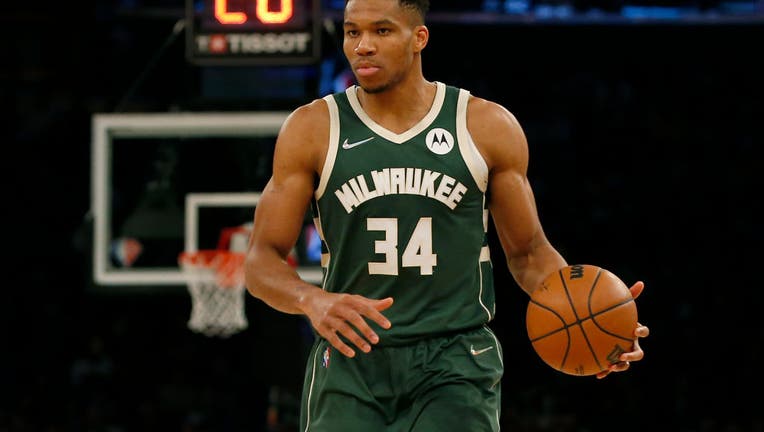 NEW YORK, NEW YORK - NOVEMBER 10: (NEW YORK DAILIES OUT) Giannis Antetokounmpo #34 of the Milwaukee Bucks in action against the New York Knicks at Madison Square Garden on November 10, 2021 in New York City. The Bucks defeated the Knicks 112-100. NOT

MILWAUKEE - Giannis Antetokounmpo led the Milwaukee Bucks to their first championship in 50 years last season, but the superstar noted in a recent interview that he could leave the team in the near future to take on a challenge elsewhere.

Antetokounmpo, who was interviewed by GQ, has always been vocal about his love for the city and the team, but after leading the franchise to a title, he is already focused on what is next.

Antetokounmpo added: "Me and my family chose to stay in this city that we all love and has taken care of us — for now. In two years, that might change. I’m being totally honest with you. I’m always honest. I love this city. I love this community. I want to help as much as possible."

Antetokounmpo’s agent, Alex Saratsis, told the magazine that he believes it’s more about the superstar player finding new challenges instead of actually leaving the team.

"I don’t think it’s, ‘I’m thinking about leaving the Bucks,’" Saratsis said. "But I think he’s genuinely like: ‘Okay, I have reached the pinnacle. The next challenge is, let’s repeat.’ But what happens if you do repeat? What’s the next challenge? What is that next barrier? When you think about it from a basketball perspective, by the age of 26, this kid has accomplished everything. So sometimes you’re going to have to manufacture what those challenges are."

As of Tuesday, the Bucks have a 6-8 record and are currently the 11th seed in the East.

A bill introduced in the Wisconsin Legislature would lighten penalties for marijuana possession in many parts of the state.

Battered and burned during last year's unrest, Kenosha's uptown neighborhood felt the brunt of the destruction, including the destruction of local businesses, but there's no rush to board up while waiting on a verdict in the Kyle Rittenhouse trial.

Nature's Path Foods on Tuesday readied a donation of 1,500 bags of healthy, organic food to families in need in the Waukesha and Milwaukee areas.