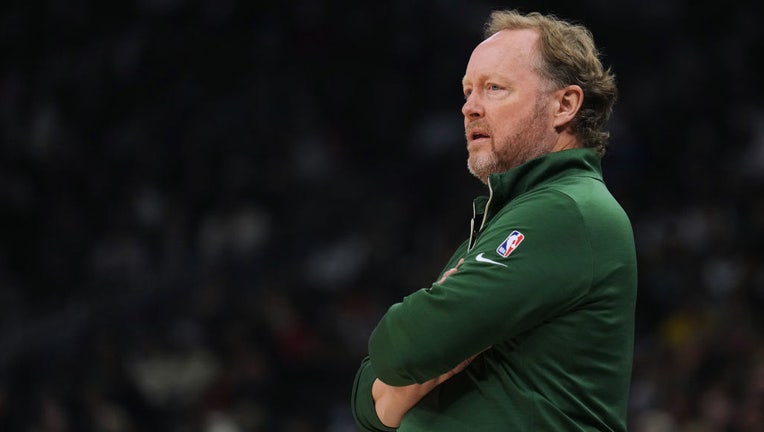 MILWAUKEE, WISCONSIN - DECEMBER 25: Head coach Mike Budenholzer of the Milwaukee Bucks looks on against the Boston Celtics in the first half at Fiserv Forum on December 25, 2021 in Milwaukee, Wisconsin. NOTE TO USER: User expressly acknowledges and a

MILWAUKEE - Mike Budenholzer has entered the NBA's health and safety protocols and Giannis Antetokounpo is sidelined with an illness unrelated to COVID-19, leaving the Milwaukee Bucks without their coach and star player Wednesday night against Toronto.

Antetokounmpo is averaging 27.9 points and 11.5 rebounds. The Bucks didn’t specify the nature of the NBA Finals MVP's illness.

Reserves Jordan Nwora, Thanasis Antetokounmpo and Semi Ojeleye, who had previously been unavailable due to the protocols, were all cleared to return to the lineup, Ham said.

"My job is to keep the bus moving forward," Ham said. "These are some unfortunate times and unfortunate circumstances. I’m not looking to make a big splash and prove to the world that I can really coach. I know that already. I’m very comfortable in my role here."

Ham said he stepped in for Budenholzer in 2017 when the pair coached together with the Hawks in Atlanta and Budenholzer had to serve a one-game suspension for bumping an official.

Ham, a former player who spent time with the Bucks, has been an NBA assistant for 11 years. He said he learned of Budenholzer’s positive test after a practice session on Tuesday evening.

"We have a tight-knit group. It would be nice to have Giannis, but he’s dealing with his own issues," Ham said. "We have a lot of strong leadership in that locker room across the board. They are going to help me as much as I’m going to help them."

The Bucks are coming off a 115-106 loss at home to the Detroit Pistons, who had the league’s worst record entering the game, on Monday night. The defeat ended Milwaukee’s six-game winning streak.

The Green Bay Packers and Detroit Lions will face off at Ford Field on Sunday, Jan. 9 – the final game of the regular season. It's a game you can see only on FOX6 – with kickoff set for noon.