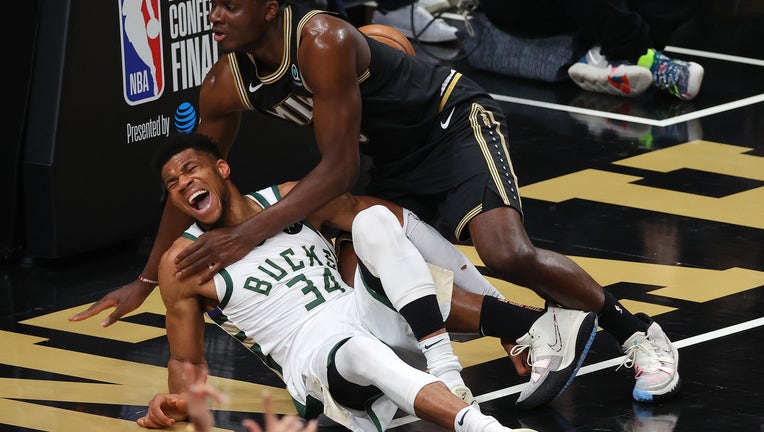 ATLANTA, GEORGIA - JUNE 29: Giannis Antetokounmpo #34 of the Milwaukee Bucks is injured against Clint Capela #15 of the Atlanta Hawks during the second half in Game Four of the Eastern Conference Finals at State Farm Arena on June 29, 2021 in Atlanta

ATLANTA - Two-time MVP Giannis Antetokounmpo sustained a hyperextension of his left knee and will not return to the Milwaukee Bucks' Eastern Conference finals game against the Atlanta Hawks on Tuesday night. He is scheduled to have imaging done Wednesday, according to ESPN.

Antetokounmpo was defending a jam by Hawks center Clint Capela with 7:14 remaining in the third quarter when his left knee appeared to buckle. He fell to the floor in obvious pain, grimacing and clutching his knee.

Antetokounmpo remained down for several minutes before rising and slowly walking to the locker room. He was supported by his brother, Thanasis Antetokounmpo, and a staff member, as he left the court. 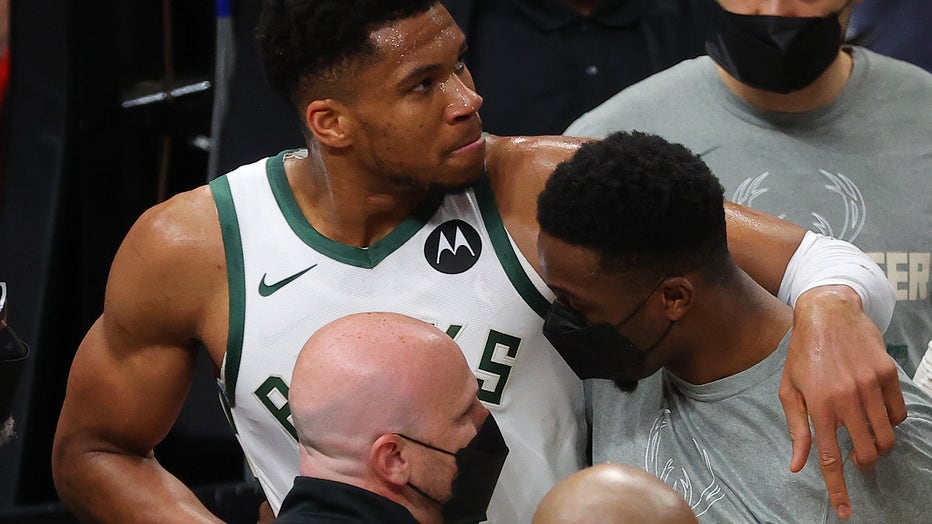 ATLANTA, GEORGIA - JUNE 29: Giannis Antetokounmpo #34 of the Milwaukee Bucks is helped off the court after being injured on a play against the Atlanta Hawks during the second half in Game Four of the Eastern Conference Finals at State Farm Arena on J

Giannis Antetokounmpo returned to the bench briefly before again heading to the locker room after the Hawks blew open the game by extending their lead to 20 points. Soon after, the Bucks announced he would not return to the game.

Antetokounmpo's status for Game 5 at Milwaukee on Thursday night is not known.

Following a slow start to the game, Antetokounmpo had scored eight of his 14 points in the opening minutes of the second half. Following the jam by Capela, the Hawks led 62-52 when the Bucks' star left the game.

The Hawks are without their leading scorer, Trae Young, who was held out with a bone bruise in his right ankle.

As the Milwaukee Bucks get deeper into the playoffs, sometimes what you need is a little good juju.

Giannis Antetokounmpo is a two-time MVP, one of the best players in the NBA, but he'll gladly cede the closer's role to Khris Middleton.