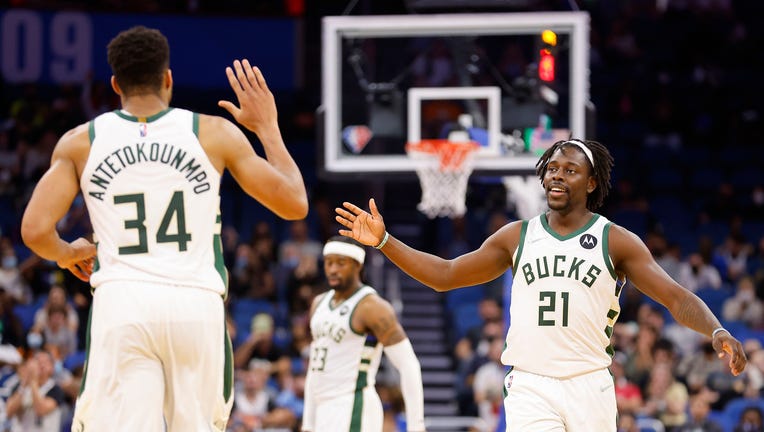 Giannis Antetokounmpo and Jrue Holiday of the Milwaukee Bucks celebrate against the Orlando Magic on December 30, 2021. (Photo by Michael Reaves/Getty Images)

MILWAUKEE - The Milwaukee Bucks' Giannis Antetokounmpo and Jrue Holiday have been named to the 2021-22 NBA All-Defensive teams, the league announced Friday, May 20.

Overall this is Antetokounmpo’s fifth NBA All-Defensive team selection, earning first team honors in each of the past four seasons in addition to a second team nod following the 2016-17 season. He was named the 2019-20 NBA Defensive Player of the Year during that stretch.

Holiday has now been named All-Defense in four of the last five seasons, earning first team honors following the 2017-18 and 2020-21 seasons and second team selections after the 2018-19 and, now, 2021-22 campaigns. In his second season with the Bucks, Holiday averaged a team-high 1.6 steals per game (9th in NBA), swiping multiple steals in 34 of his 67 games played.

Voters selected two guards, two forwards and one center for each team, choosing players at the position they play regularly. Players who received votes at multiple positions were slotted at the position at which they received the most voting points.