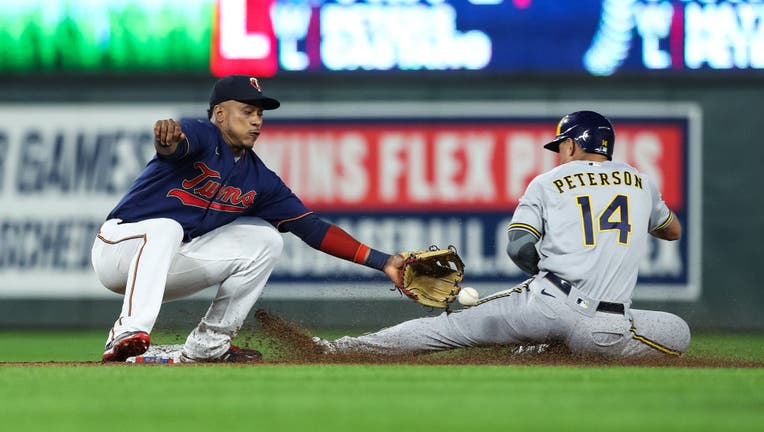 MINNEAPOLIS, MN - JULY 12: Jace Peterson #14 of the Milwaukee Brewers is tagged out by Jorge Polanco #11 of the Minnesota Twins on a steal attempt at second base in the sixth inning at Target Field on July 12, 2022 in Minneapolis, Minnesota. The Brew

MINNEAPOLIS - The Milwaukee Brewers sure weren't deterred by the storms in Minnesota.

With the pitching they have waiting in the late innings, there's not a lot to worry about.

Andrew McCutchen and Willy Adames each hit a two-run homer, and the Brewers outlasted three rain delays to beat the Twins 6-3 on Tuesday night in the opener of a brief border-state series between the first-place teams.

Jonathan Davis and Jace Peterson pitched in RBI singles to support 29-year-old rookie Jason Alexander, who endured two of the stoppages and stayed in for four innings with three hits and two walks allowed. Then the Brewers turned a 5-2 lead over to their dominant bullpen and bounced back from a 2-4 homestand.

"You get in trouble trying to manage along with the weather," manager Craig Counsell said, "so we did the best we could and our guys did a good job."

Jandel Gustave (2-0) worked a hitless fifth for the win. Brad Boxberger gave up a run in the seventh, but Devin Williams pitched a perfect eighth inning to set up Josh Hader for his 27th save in a perfect ninth.

Hader has decided to skip the All-Star Game to spend more time with his wife and month-old son. The Brewers are hoping Williams gets a spot on the squad if another injury replacement is needed.

"We understand there's a good list of pitchers there having good years, and you respect that, but he's every bit what those guys are doing, too, and completely deserving of it," Counsell said.

Jorge Polanco homered and Nick Gordon and Byron Buxton drove in runs for the Twins. Gio Urshela had a 3-1 count with the bases loaded against Hoby Milner, but after crushing a long foul ball that hooked to the left of the pole he grounded out to end that inning.

Minnesota right-hander Josh Winder (4-3) finished five innings after giving up five runs and four hits. McCutchen took him deep in the first for his ninth homer of the season. Adames hit No. 18 in the fifth to elicit one of many roars from the Brewers fans in the crowd that helped boost the season-high attendance total for the Twins to 37,183.

The Twins, who have been in first place for all but one day since April 24, had their AL Central lead whittled by a doubleheader that Cleveland and Chicago split. They're 3 1/2 games ahead of the Guardians and five games in front of the White Sox.

The delays totaled 1 hour and 43 minutes, giving the grounds crew quite the workout. The game continued for a bit through the first downpour in the bottom of the second, until Twins manager Rocco Baldelli came out of the dugout to talk to plate umpire Mark Carlson. Then the players were summoned off the field with Urshela up.

Urshela was batting again in the fourth when a much lighter rain began. As the fans scrambled for the concourses and overhangs, the umpires emptied the diamond for what ultimately was a false alarm. The tarp was quickly rolled back up, and play resumed just 8 minutes later.

"You’d rather be out there without pouring rain and have an at-bat that doesn’t go on over the course of an hour, but he can handle it," Twins manager Rocco Baldelli said.

The third wave arrived between the fifth and sixth innings, a pitch-black sky that came with lightning, wind gusts and a deluge stronger than the first rain. That delay lasted 66 minutes.

Brewers: RF Hunter Renfroe (left calf) was reinstated from the 10-day injured list after missing 13 games, and RHP Chi Chi González was designated for assignment. Renfroe went 0 for 3. ... LF Christian Yelich was scratched with mid-back tightness. ... CF Tyrone Taylor, who has missed eight games with a concussion, has experienced a recurrence of symptoms and remains out indefinitely.

Twins: 1B Miguel Sanó (left knee) had his rehab ramped up with an assignment to Triple-A St. Paul, where the Saints had their game suspended by the rain. Sanó walked and hit a two-run double. As for how the 2017 All-Star might fit on the roster once he's cleared? "Every time you think you know what’s coming your way, you’re generally going to be wrong, so I’m not spending too much time on the 10 different scenarios that could play out," Baldelli said. ... RF Max Kepler (bruised right knee) and LHP Jovani Moran (bruised right calf) departed the game with minor injuries.