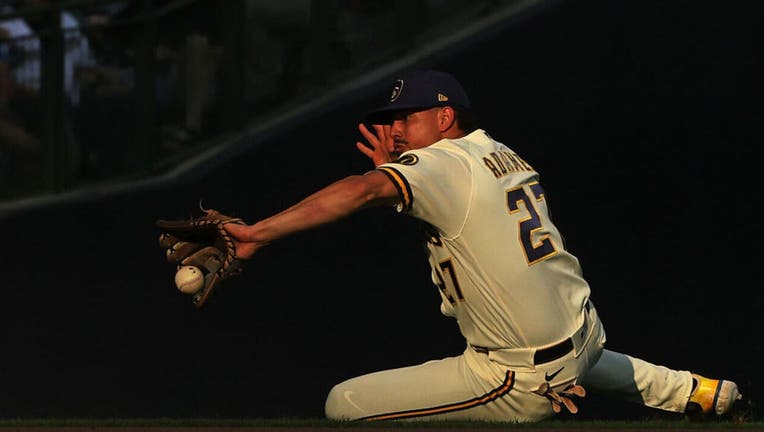 MILWAUKEE, WISCONSIN - SEPTEMBER 08: Willy Adames #27 of the Milwaukee Brewers fields a fly ball during the eighth inning of game one of a doubleheader against the San Francisco Giants at American Family Field on September 08, 2022 in Milwaukee, Wisc

MILWAUKEE - Corbin Burnes broke out of his recent slump and gave the Milwaukee Brewers a boost as they attempt to rejuvenate their playoff hopes.

Burnes struck out 14 and allowed three hits in eight shutout innings as the Brewers beat the San Francisco Giants 2-1 in the first game of a doubleheader Thursday.

The Brewers are at home for 20 of their last 26 games. They're hoping that schedule helps them go on a late surge as they attempt to chase down the Philadelphia Phillies and San Diego Padres for the NL's final wild-card spots.

"Having all these home games at the end is definitely going to help us with this playoff push, but it takes some good baseball for us to get in there," Burnes said.

He entered this doubleheader having allowed 17 earned runs in 21 innings over his last four starts. But he dominated the Giants and showcased the form that enabled him to win the NL Cy Young Award last season.

"I just did a better job of commanding it early and forcing them to swing, making some pitches out of the zone and getting them to swing and miss," Burnes said. "As far as the last couple outings to this one goes, just better job getting ahead and finding the strike zone a little better. But as far as stuff, it was the same."

Burnes struck out 10 or more batters for the ninth time this season to tie the Brewers' single-season record set by Ben Sheets in 2004. Burnes (10-6) also holds the franchise record for double-digit strikeout games with 21.

"Nothing new," Giants manager Gabe Kapler said. "That’s Corbin Burnes. That was as good as we’ve seen him. His stuff was carrying through the zone. He was hitting the top of the zone. His cutter was working well. The ball was moving all over the place. It’s tough to name five better starters in baseball."

Burnes needed to be at his best to outduel San Francisco’s Jakob Junis (4-5), who struck out four and allowed three hits, two runs and two walks in six innings. Junis entered in the second inning, relieving opener Scott Alexander.

The Giants opened the scoring in the third inning as LaMonte Ward hit a two-out single and came home on Mike Yastrzemski’s double.

Burnes retired the next 13 batters, striking out eight of them, before David Villar opened the eighth with an infield single. Burnes got out of the eighth when Luis Gonzalez grounded into a double play and Joey Bart lined to short.

Devin Williams retired the side in order in the ninth to earn his 11th save in 12 opportunities.

Burnes didn't walk a batter, although he hit one.

After not putting a runner on base in the first three innings, the Brewers broke through with two runs in the fourth.