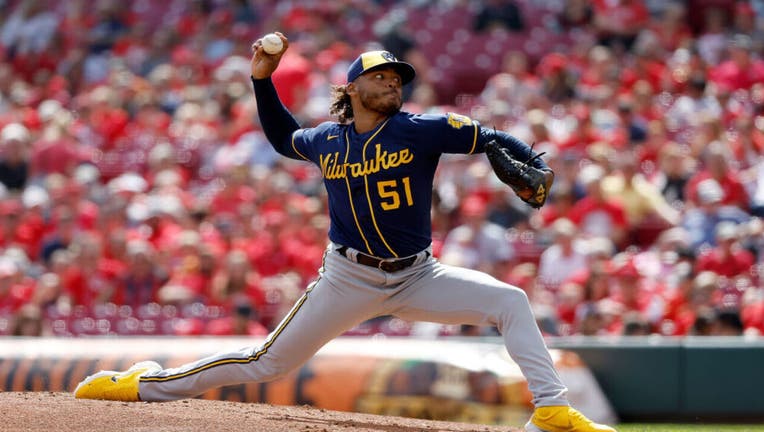 CINCINNATI, OH - SEPTEMBER 25: Freddy Peralta #51 of the Milwaukee Brewers throws a pitch during the second inning of the game against the Cincinnati Reds at Great American Ball Park on September 25, 2022 in Cincinnati, Ohio. (Photo by Kirk Irwin/Get

It was the final road game for the Brewers, who dropped to one and a half games behind the Phillies for the final NL wild card playoff spot. Milwaukee finishes the season at home, and would lose any head-to-head tiebreakers with the Phillies or Padres because they lost the season series with both of them.

Hunter Renfroe homered for the Brewers, who were unable to complete their first four-game sweep of the Reds since 2003. Renfroe who tied a career high with four hits including two homers and a season-high five RBI on Saturday, homered on the first pitch leading off the second inning to put the Brewers ahead 1-0.

The Brewers were denied what could have been a two-run single by Tyrone Taylor in the second when the ball struck Keston Hiura between second and third for the final out.

Cincinnati tied the score 1-1 in the fourth when Ashby hit Austin Romine with the bases loaded — one of two hit batters for Ashby.

Milwaukee's lone run and all of their hits against Reds starter Nick Lodolo came in the second inning.

Steer's solo home run leading off the eighth was his second homer of the season, first since his major-league debut on Sept. 2.