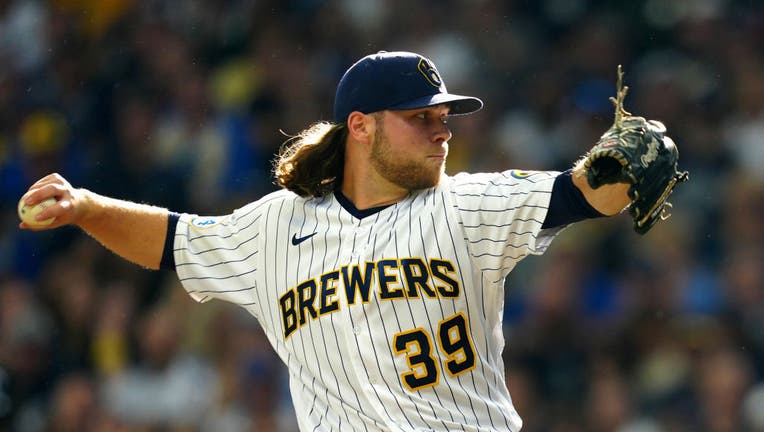 Corbin Burnes pitches during Game 1 of the NLDS between the Atlanta Braves and the Milwaukee Brewers at American Family Field on Friday, Oct. 8, 2021.(Photo by Daniel Shirey/MLB Photos via Getty Images)

MILWAUKEE - Milwaukee Brewers pitcher Corbin Burnes has been named the winner of the 2021 National League Cy Young Award, recognizing excellence on the mound.

Burnes was 11-5 with a Major League-best 2.43 ERA among qualified pitchers in 28 starts. He struck out 234 batters in 167 innings pitched while walking 34 and allowing seven home runs.

He is the third Brewers pitcher to win a Cy Young award, given annually to one pitcher from each league, and the first to do so in the National League. The franchise's previous winners – Rollie Fingers in 1981 and Pete Vuckovich in 1982 – one the award in the American League.

The season had highs and lows for Burnes. He missed a stretch due to COVID-19, but later combined for a no-hitter with Josh Hader. He was also a 2021 National League All-Star.

Burnes edged Philadelphia's Zack Wheeler for the award, with both receiving 12 first-place votes from members of the Baseball Writers’ Association of America. Max Scherzer finished third.

The Brewers Community Foundation, the charitable arm of the Milwaukee Brewers, announced that more than $2 million was raised this season.