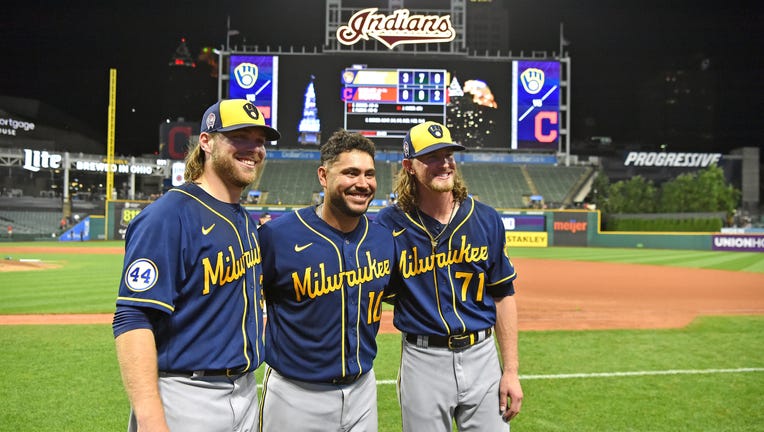 Starting pitcher Corbin Burnes, catcher Omar Narvaez and closing pitcher Josh Hader of the Milwaukee Brewers pose for a picture in front of the scoreboard after the Brewers threw a combined no-hitter to defeat the Cleveland Indians at Progressive Fie

CLEVELAND - In a sometimes sticky season, Corbin Burnes got a grip on history.

Months after Major League Baseball clamped down on pitchers' use of illicit foreign substances following a rash of early no-hitters, Burnes cemented 2021 as the Season of the No-No with just the second no-hitter in Brewers history.

"It was a masterpiece," Milwaukee manager Craig Counsell said.

Burnes (10-4) struck out 14 with a career-high 115 pitches over eight innings, taking a perfect game into the seventh while overpowering the Indians, who were no-hit for a record third time in 2021. All of those came with starter Zach Plesac on the mound.

This time, Cleveland was stymied by Burnes — who has become a Cy Young contender as the Brewers run away with the NL Central — and Hader, one of the game's top closers.

"Anyone would want to keep pitching in that situation, but if there was anyone I would want out there for the ninth, it would be Josh Hader," Burnes said. "There were no nerves with him. It was more like a done deal when he came in."

The right-handed Burnes was in control from the start, striking out 11 of his first 14 hitters and retiring the first 18 in order. After walking Myles Straw to start the seventh, the 26-year-old got through the eighth thanks to a diving catch by center fielder Lorenzo Cain on Owen Miller's liner.

"I was definitely on my horse, ready to go get that one," Cain said. "You need a little bit of everything to go right in a no-hitter."

The Progressive Field crowd booed as Hader came on in the ninth. He overpowered Oscar Mercado, striking him out to start the inning. Then, first baseman Jace Peterson went into foul territory to making a lunging catch for the second out.

Hader ended the no-hitter by getting Straw to flail at a pitch in the dirt for his 31st save. The Brewers stormed the field to share hugs and high-fives with a signature victory in their runaway season.

"I had to fight pretty hard (with Counsell) for the eighth to come back out, so I knew I had no shot for the ninth," Burnes said.

Burnes dropped his ERA to 2.25 and has more than doubled his career high for strikeouts with 210 in 152 innings. He's been vying with Philadelphia's Zack Wheeler and the Dodgers' Max Scherzer for the NL Cy Young Award. This gem, no doubt, will have some sway with voters.

"Corbin felt good after the eighth, but knowing you’re putting in Josh Hader to finish it played a part in the decision," Counsell said.

The Brewers improved to a franchise-record 33 games over .500 while slimming their magic number to clinch the division to eight.

Arizona rookie Tyler Gilbert had thrown the majors’ most recent no-hitter on Aug. 14, and the Chicago Cubs threw the only previous combined effort on June 24. The other no-hitters this season were thrown by San Diego’s Joe Musgrove (April 9), Carlos Rodón of the Chicago White Sox (April 14), Cincinnati’s Wade Miley (May 7), Detroit’s Spencer Turnbull (May 18) and the Yankees’ Corey Kluber (May 19).

Most of those gems were thrown before MLB cracked down on the use of sticky foreign substances by pitchers in late June.

"I don’t think anyone’s going to be upset about putting a no-hitter in the books," Burnes said.

The Brewers completed this bit of history three days after Minnesota rookie Joe Ryan retired the first 19 Indians batters in a 3-0 win at Progressive Field.

Plesac couldn’t get his head around being on the wrong side of three no-hitters. Prior to Saturday, Jim Perry was the only starter in baseball history to have his opponent throw a no-hitter three times in a career prior to Saturday, per Elias.

Straw had faced Burnes in the minor leagues but admitted he had little chance against him on this late summer evening.

"He dominated," Straw said. "He’s going to get some Cy Young votes this year, I’m sure of it. You just have to tip your cap, come back tomorrow and compete again."

The Brewers scored twice in the first inning on an RBI double by Christian Yelich and a sacrifice fly from Omar Narváez. Milwaukee made it 3-0 in the second when Rowdy Tellez doubled home Daniel Vogelbach.

Tellez experienced right knee pain while running the bases and left the game.

Peterson returned to action after being struck by a foul ball on his left arm Wednesday in the home dugout against Philadelphia. Manager Craig Counsell said Peterson was hit squarely by a line drive off the bat of a Phillies player, but the ball narrowly missed hitting his elbow.

Brewers: RHP Brandon Woodruff (flu-like symptoms) will not make his scheduled start Sunday after becoming ill in the team hotel. Counsell said Woodruff "has lost some weight from the bug," pushing his next outing to Wednesday at Detroit.

Brewers: LHP Eric Lauer (5-5, 3.18 ERA) will start on regular rest in the three-game series finale, moving up one spot in the rotation to replace Woodruff. The Northeast Ohio native and Kent State product has never pitched against the Indians.

Indians: RHP Aaron Civale (10-3, 3.25 ERA) makes his second start since spending 77 days on the injured list with a sprained third finger on his right hand. Civale allowed one run in 4 2/3 innings in his return, losing to the Twins on Sept. 7.

Chez Mellusi ran for 144 yards and a touchdown, leading No. 18 Wisconsin to a 37-7 victory over Eastern Michigan on Saturday night.

The Wisconsin DNR is reminding hunters of the first opportunity to pursue deer this fall with the opening of the archery and crossbow deer seasons.