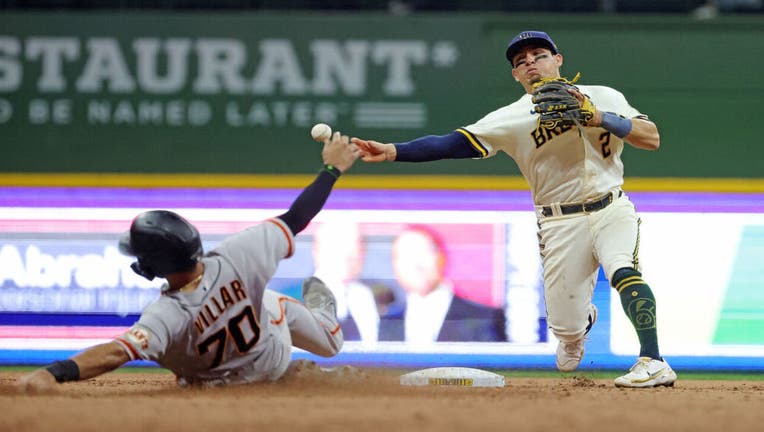 In the opening game, Corbin Burnes struck out 14 and allowed three hits in eight shutout innings in a 2-1 victory.

Peralta left the second game due to fatigue in his right shoulder after walking Tommy La Stella to lead off the third inning. The Brewers led 3-0 at the time.

The Brewers are at home for 20 of their last 26 games, a stretch that started with this doubleheader. They're hoping that schedule helps them go on a late surge as they attempt to chase down the Philadelphia Phillies and San Diego Padres for the NL's final wild-card spots.

"Having all these home games at the end is definitely going to help us with this playoff push, but it takes some good baseball for us to get in there," Burnes said.

Burnes entered this doubleheader having allowed 17 earned runs in 21 innings over his last four starts. But he dominated the Giants and showcased the form that enabled him to win the NL Cy Young Award last season.

He struck out 10 or more batters for the ninth time this season to tie the Brewers' single-season record set by Ben Sheets in 2004. Burnes (10-6) also holds the franchise record for double-digit strikeout games with 21.

"Nothing new," Giants manager Gabe Kapler said. "That’s Corbin Burnes. That was as good as we’ve seen him. His stuff was carrying through the zone. He was hitting the top of the zone. His cutter was working well. The ball was moving all over the place. It’s tough to name five better starters in baseball."

Burnes needed to be at his best to outduel San Francisco’s Jakob Junis (4-5), who struck out four and allowed three hits, two runs and two walks in six innings. Junis entered in the second inning, relieving opener Scott Alexander.

The Giants opened the scoring in the third inning as LaMonte Ward hit a two-out single and came home on Mike Yastrzemski’s double. Milwaukee's Christian Yelich and Hunter Renfroe hit consecutive RBI doubles in the fourth.

Milwaukee took the lead for good in the second game by scoring three runs in the first inning off Alex Young (0-1). Only one of the runs was earned.

Joc Pederson homered for the Giants in the second game.

Milwaukee's Peter Strzelecki (2-1) pitched two innings of scoreless relief to get the win in the second game.

Devin Williams got his 11th save in 12 opportunities in the first game. Taylor Rogers finished the second game for his 31st save in 39 opportunities.

The two teams combined for just 16 hits in the doubleheader. The Brewers had nine and the Giants had seven.