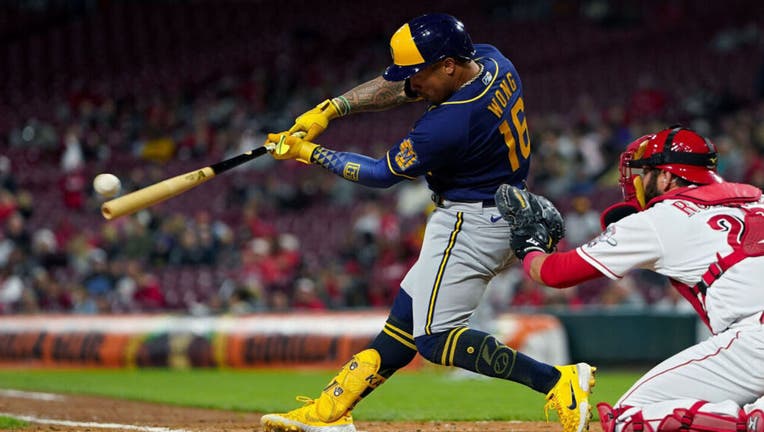 CINCINNATI, OHIO - SEPTEMBER 22: Kolten Wong #16 of the Milwaukee Brewers hits a home run in the sixth inning, his second of the game, against the Cincinnati Reds at Great American Ball Park on September 22, 2022 in Cincinnati, Ohio. (Photo by Dylan

Wong hit a two-run drive in the second inning against Hunter Greene. He hit another two-run shot in the sixth off Dauri Moreta and a solo drive in the eighth against Joel Kuhnel. Wong has 15 homers and 46 RBIs on the season.

The second-place Brewers (80-70) opened a four-game set against lowly Cincinnati with their second straight win. They are trying to catch Philadelphia and San Diego in the race for one of the NL's last two wild cards.

Woodruff (12-4) struck out 11 in six innings. He allowed three hits and walked two.

The 6-foot-4 right-hander has 32 strikeouts in his last three starts — all wins.

Kyle Farmer hit his 13th homer in the sixth to account for Cincinnati's only run. Greene (4-13) struck out eight in five innings.

The NL Central matchup drew a crowd of 9,889, the sixth under 10,000 this season at Great American Ball Park.

After throwing 47 pitches at least 100 miles per hour in a 1-0 loss at St. Louis on Saturday, Greene reached triple figures 15 times against Milwaukee, according to Statcast.