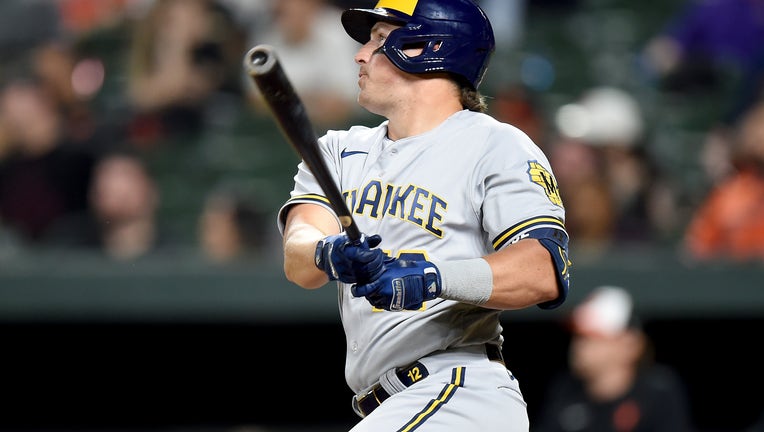 BALTIMORE, MARYLAND - APRIL 13: Hunter Renfroe #12 of the Milwaukee Brewers hits a single in the ninth inning against the Baltimore Orioles at Oriole Park at Camden Yards on April 13, 2022 in Baltimore, Maryland. (Photo by Greg Fiume/Getty Images)

BALTIMORE - Kolten Wong tripled in the tiebreaking run in the ninth inning, and the Milwaukee Brewers squeezed past the Baltimore Orioles 4-2 Wednesday night after blowing a two-run lead in the eighth.

The Brewers received a sparkling performance from Corbin Burnes, who flashed the form that earned him last year's NL Cy Young Award. But the shaggy-haired righty failed to get the win despite throwing seven shutout innings.

Coming off a lackluster performance on opening day against the Cubs, Burnes gave up three hits, struck out eight and walked one. He left with a 2-0 lead, but Baltimore promptly tied it in the eighth against Devin Williams, who yielded a walk and hit a batter around an RBI single to Ryan Mountcastle.

Williams was replaced with the bases loaded, and Brad Boxberger (1-0) gave up a sacrifice fly to Trey Mancini before ending the inning with a strikeout.

Milwaukee bounced back in the ninth against Jorge López (0-1). Hunter Renfroe singled and scored on Wong's liner into the right-field corner before Rowdy Tellez tacked on an RBI double.

Josh Hader worked the bottom half for his third save — one for each of Milwaukee's wins.

Baltimore's only extra-base hit off Burnes — a leadoff double in the fifth inning by Rougned Odor — was followed by three successive strikeouts.

Milwaukee backed Burnes offensively with a two-run second against left-hander John Means. Keston Hiura opened with a walk before Tellez hit a two-out RBI double and scored on a single by Mike Brosseau.

Means was pulled after the fourth inning with left forearm tightness, according to the team. He gave up four hits and retired the last seven batters he faced.

Means and the Baltimore bullpen pitched well against the defending NL Central champions, but Burnes was better. After allowing three runs in five innings in Chicago last week, the 27-year-old rebounded with a dominant outing that helped the Brewers to take the deciding game of the series.

Burnes closed out his 97-pitch effort by getting Austin Hays to hit into a double play in the seventh.

Wisconsin's first indoor professional drone race over ice will be held at the Pettit National Ice Center – April 29 through May 1.

Officials at Waukesha North High School have launched an investigation after several students got sick after Prom.