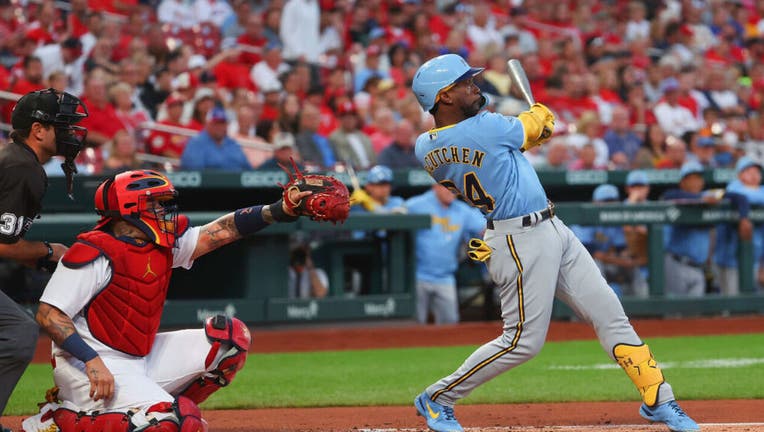 ST. LOUIS - Andrew McCutchen homered and drove in three and the Milwaukee Brewers used eight pitchers in an 8-4 victory over the St. Louis Cardinals on Tuesday night.

The Brewers moved within seven games of the NL Central-leading Cardinals.

Down three starters to injuries, the taxed Brewers staff was stretched even further when starter Matt Bush left after just 15 pitches because of right groin discomfort. Bush was the starter in what the club had already designated as a bullpen game.

Luis Perdomo (2-0) was the winner, allowing one run in three innings. Perdomo, Brad Boxberger, Hoby Milner, Justin Topa, Taylor Rogers and Brent Suter combined to retire 20 of 22 batters from the third inning on.

McCutchen hit his 17th homer of the season, a two-run blast off Jordan Montgomery in the fifth, to break a 4-all tie. Christian Yelich added to the lead by getting hit by Packy Naughton's pitch with the bases loaded in the sixth.

Hunter Renfroe had a pair of hits including an RBI single in the eighth.

The Brewers took a 2-0 lead in the first on RBI doubles from Willy Adames and McCutchen. Adames tied it with an RBI single in the second and Yelich drove in another on a fielder’s choice.

It was the worst start in eight tries as a Cardinal for Montgomery (8-4), who was acquired at the trade deadline from the New York Yankees. Montgomery allowed six runs, four earned, and gave up seven hits while striking out six.

Nolan Arenado had a two-run double in the first and Albert Pujols added an RBI single to give the Cardinals a short-lived 3-2 lead.

Tommy Edman’s RBI single in the second tied the game at 4-4. Edman has a career-high 14-game hitting streak.