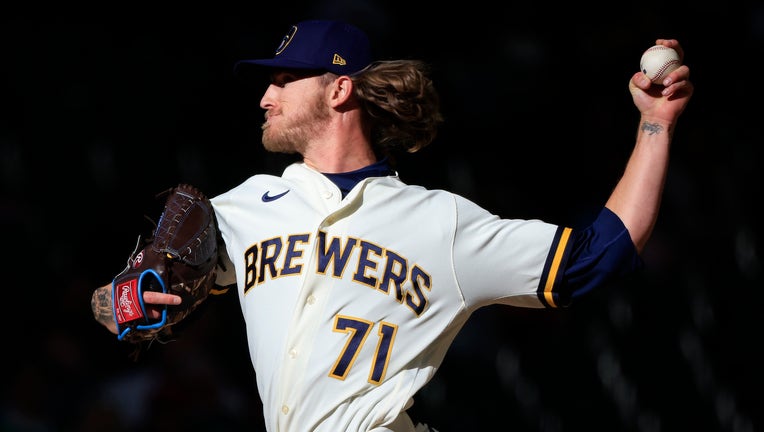 MILWAUKEE, WISCONSIN - APRIL 17: Josh Hader #71 of the Milwaukee Brewers throws a pitch during the ninth inning in the game against the St. Louis Cardinals at American Family Field on April 17, 2022 in Milwaukee, Wisconsin. (Photo by Justin Casterlin

MILWAUKEE - Tyrone Taylor hit a two-run double in the seventh inning to give Milwaukee a cushion, and the Brewers outlasted Albert Pujols and the St. Louis Cardinals 6-5 on Sunday.

Pujols hit his 681st career homer, a three-run shot in the third inning off Aaron Ashby that tied the game at 3, but the Brewers regained the lead in the fourth on Willy Adames' bases-loaded walk and held on from there.

Taylor's seventh-inning double made it 6-3. St. Louis got within one in the eighth against Devin Williams, but Josh Hader struck out two during a perfect ninth for his fourth save of the season and 100th of his career.

Making his first start of the season after two relief appearances, Ashby issued four walks and a pair of hits over four innings. The three runs he allowed — all on Pujols’ blast — were unearned thanks to an error on Milwaukee second baseman Kolten Wong to open the inning.

The Brewers jumped ahead 3-0 in the first. Andrew McCutchen had a sacrifice fly, and Rowdy Tellez hit a run-scoring double to the wall in left-center. Milwaukee got another run on a throwing error by catcher Andrew Knizner.

Hudson retired six of his next seven batters before Keston Hirua brought his day to an end with a single to lead off the fourth. Reliever T.J. McFarland gave up a single and a walk to load the bases. After striking out Wong, McFarland lost a seven-pitch battle to Adames that gave Milwaukee the lead.

The Milwaukee Admirals lost to the Iowa Wild, but punched their ticket to the Calder Cup Playoffs as they earned a point at home Saturday, April 16.

Police are investigating a drive-by shooting that happened near 35th and Highland around 7:20 p.m. Saturday, April 16.