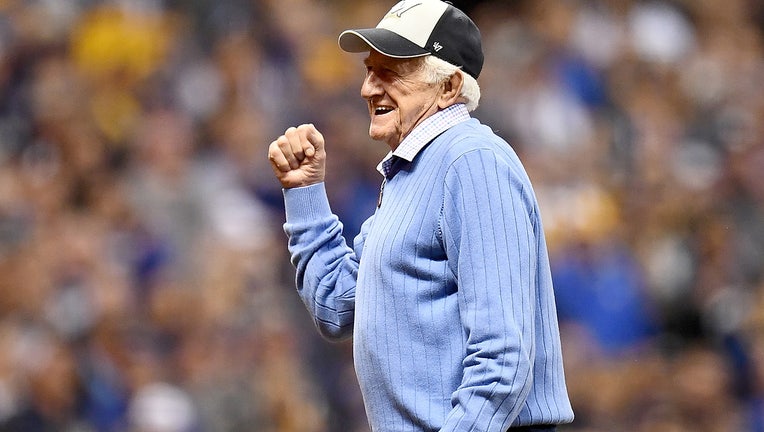 MILWAUKEE, WI - OCTOBER 12: Former baseball player Bob Uecker throws out the first pitch prior to Game One of the National League Championship Series between the Los Angeles Dodgers and the Milwaukee Brewers at Miller Park on October 12, 2018 in Milw

A news release says the governor made this proclamation to celebrate the legacy of Bob Uecker in Major League Baseball – and to recognize his 50th anniversary as the voice of the Milwaukee Brewers.

The governor issued the following statement:

"As a lifelong Brewers fan, some of my favorite baseball memories over the years have been narrated by Bob Uecker. Bob is a homegrown Milwaukeean who has tremendous pride and love for the sport, his hometown, and his home state, and is more than deserving of this statewide day of celebration of his career, legacy, and achievements."

"Bob is a wonderful part of this city. For decades, his voice has been the sound of the baseball season here—a familiar, passionate, and humorous accompaniment to the game on the field. Bob brings a genuine delight in sharing America’s pastime with the world."

The Brewers will be honoring Uecker during Saturday's game at American Family Field against the New York Mets.

Tyrone Taylor hit a grand slam, but it was not enough as the St. Louis Cardinals beat the Milwaukee Brewers for a 12th consecutive win.

Packers' Aaron Rodgers grew out his hair for this reason

With Whistling Straits as the stage, golf’s biggest international event, the Ryder Cup, is on the playbill. It’s been a long time coming for Lee Wybranski, the official poster artist for the Ryder Cup.