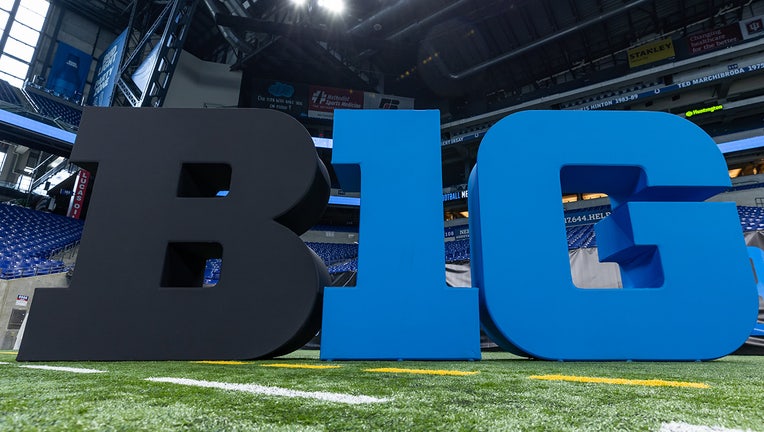 INDIANAPOLIS, IN - JULY 22: The Big Ten Conference logo is seen on the field during the Big Ten Football Media Days at Lucas Oil Stadium on July 22, 2021 in Indianapolis, Indiana. (Photo by Michael Hickey/Getty Images)

ROSEMONT, Ill. - The Big Ten is the latest Power Five conference to announce that a team must forfeit if it doesn't have enough players available for a league game because of COVID-19.

The Big Ten said Monday the team that forfeits will be assessed a loss in the conference standings and its opponent will be credited with a win. If both teams are unable to compete on the date of a scheduled conference game because of COVID-19, and the game can't be rescheduled, it will be considered a "no contest."

The Power Five conferences appear headed toward having similar forfeit policies, except the Atlantic Coast Conference is charging both teams with a forfeit if neither can play because of the virus.

Big 12 teams unable to play because of COVID-19, or any other reason, will have to forfeit and be given a loss in the conference standings. A no contest would be declared only if both teams are unable to compete, and there are no plans to make up any games not played as scheduled.

Pac-12 teams that can't play will forfeit, but the conference did not directly address what happens if both teams are unable to play.

The Southeastern Conference has not released its policy, but Commissioner Greg Sankey has warned that teams that can't play will forfeit and that games will not be rescheduled.

In the ACC, teams forfeiting games will be assigned a loss in the standings, and the team that was prepared to play will be awarded a victory. If both teams are unable to play because of the player shortages, both will be forced to forfeit.

One Whitefish Bay senior is following in his brothers footsteps to Madison, but first he wants to help the blue dukes win a state championship.