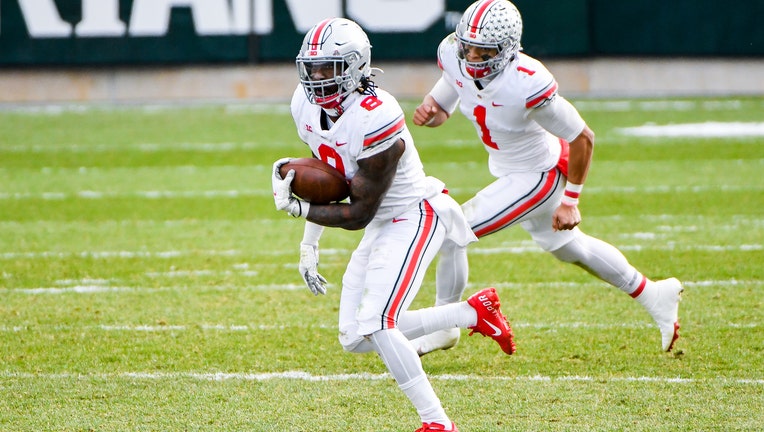 EAST LANSING, MI - DECEMBER 05: Ohio State Buckeyes running back Trey Sermon (8) takes a hand off and runs down the sidelines for a long touchdown run during the Michigan State Spartans vs Ohio State Buckeyes game on Saturday December 5, 2020 at Spar

COLUMBUS, Ohio - The Big Ten Conference dropped its six-game minimum requirement for the league championship game Wednesday, clearing the way for No. 3 Ohio State to take on No. 15 Northwestern in another chance for the Buckeyes to burnish their playoff credentials.

The Buckeyes (5-0) will try for their fifth straight conference title when they face the Wildcats (5-1) in Indianapolis. Ohio State finished the regular season with only five games after Michigan had to pull out of Saturday's showdown because of COVID-19 issues.

The rule change had to be approved by the Big Ten Conference Administrators Council, which includes athletic directors, senior women's administrators and presidents from all 14 schools.

“The decision was based on a competitive analysis which determined that Ohio State would have advanced to the Big Ten football championship game based on its undefeated record and head-to-head victory over Indiana, regardless of a win or loss against Michigan,” the Big Ten said in a statement.

The conference determined before the season that teams would have to play six of their eight scheduled games to qualify for the championship game. Ohio State — No. 4 in the College Football Playoff rankings and the conference's only undefeated team — has missed three games because of issues with the pandemic.

The latest was the annual grudge match against Michigan, which canceled its trip to Columbus because of rising COVID-19 cases and players in quarantine. Falling a game short of the threshold set by the league, the Buckeyes would have been outside looking in.

Ohio State coach Ryan Day suggested Tuesday that the conference’s six-game rule needed to be “looked at hard” to allow the Buckeyes in. He argued the rule was made early, before the pandemic caused delays and pauses that led to improvisational changes throughout the season.

Though Ohio State is already in the top four of the CFP rankings, a win against Northwestern could be important in seeding. The CFP selection committee said it ranks teams based on on-field performace, “using conference championships won, strength of schedule, head-to-head results and comparison of results against common opponents to decide among teams that are comparable.”

The ACC made a similar decision recently, guaranteeing a league title game between Clemson and Notre Dame with both teams also hoping for a CFP berth along with a conference champinoship.

The Big Ten change was made at the expense of surprising Indiana (6-1), which would have gone to the title game if the six-game rule had remained intact. The No. 9 Hoosiers, who lost 42-35 at Ohio State earlier this season, had Saturday's game against rival Purdue called off because of COVID-19 issues.

Indiana athletic director Scott Dolson said the Hoosiers were looking forward to completing one of the best seasons in program history.

“Although we understand the conference’s decision, we are disappointed," Dolson said. "From the start of the year, we have said we can only control what we can control. We had a chance to earn our spot in the Big Ten championship game, but ultimately fell a touchdown short on the road against a great Ohio State team.”

The Month of Merriment celebration will commence this holiday season at the Milwaukee County Zoo with restrictions.