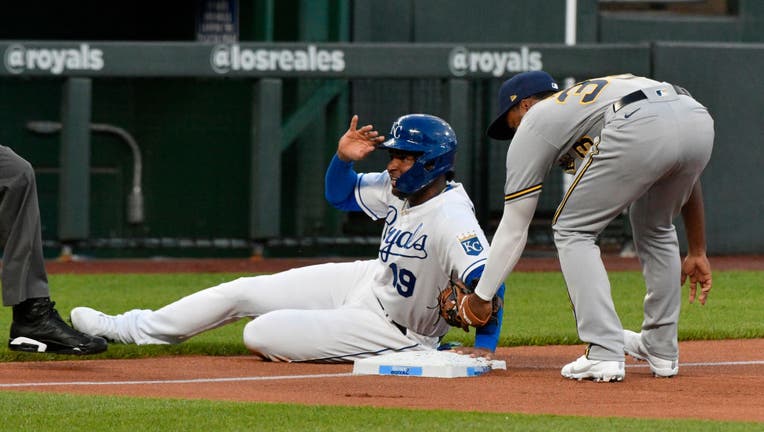 KANSAS CITY, MISSOURI - MAY 18: Kelvin Gutierrez #19 of the Kansas City Royals slides safely into third past Pablo Reyes #33 of the Milwaukee Brewers as he advances on a Michael A. Taylor hit in the second inning at Kauffman Stadium on May 18, 2021 i

KANSAS CITY, Mo. - Whit Merrifield slid under the tag to give the Royals the lead with two outs in the eighth inning, Brewers manager Craig Counsell immediately challenged the bang-bang call and his counterpart Mike Matheny probably groaned.

You see, it was just two days ago in Chicago that a controversial call at the plate was upheld — Kansas City has requested an explanation from the league on it — that resulted in a White Sox run and ultimately doomed the Royals to a loss.

So, was Matheny nervous during another review Tuesday night?

"Nope," he said, tongue planted firmly in cheek. "I have the utmost trust and respect in the replay process."

This time, the process worked in Matheny's favor. The safe call stood, the Royals tacked on another run when Luis Urias committed an error on a groundball by Salvador Perez, and Kansas City went on to a 2-0 victory.

"When they did the replay, it looked close," said Andew Benintendi, whose single sent Merrifield charging home from second base. "I think in that situation the initial call was huge."

The Royals' Kris Bubic, who had been working in relief but got the start when Danny Duffy headed to the injured list, threw six innings of one-hit ball.

The bullpen did the rest with Jake Brentz (1-0) getting the last out of the eighth inning to earn his first career win and Josh Staumont handling the ninth for his fourth save.

Meanwhile, Brandon Woodruff (2-2) had little to show for a mostly masterful night.

"I mean, we're going to sing this song for as long as replay is around," Counsell said. "There's no reason to answer these questions about replay. What are we supposed to say about it? I mean, look, he called him safe."

As if that didn't spoil the night for Milwaukee, Avisail Garcia was tossed in the ninth for arguing balls and strikes by plate umpire Brian Gorman with a 2-2 count and two outs. Counsell also was thrown out for defending his hitter, leaving Daniel Vogelbach to swing wildly at Staumont's pitch for the game-ending third strike.

"I just don't think a player can be ejected simply for throwing his hand in the air in the ninth inning with two outs," Counsell said. "The umpire has to know there's emotion going on at that point. That was my point. ... He took an emotional point in the game and put it in his hands and that was disappointing."

Most of the game amounted to a pitch-for-pitch duel between two young starting pitchers.

Woodruff's only hiccups before the fateful eighth inning came in the second, when he gave up a couple two-out singles, and the fifth, when the Royals gave up a couple outs on the basepaths. Woodruff otherwise cruised right along, keeping impatient Kansas City hitters baffled by his fastball and sinker.

Bubic, who made 10 starts last season, struck out four and walked two.

Both starters were helped by a stiff breeze out of right field and thick, soupy air that kept a couple of potential homers in the park. The spring weather also produced a popup shower in the second inning that led to a 21-minute delay.

Brewers OF Christian Yelich played for just the second time in five weeks because of stiffness in his lower back that first showed up April 11 in St. Louis. He tried to return May 3 in Philadelphia but played just one game before returning to the injured list. He wound up going 0 for 4 with three strikeouts.

Yelich served as the DH after playing in the outfield during a three-game rehab assignment at Triple-A Nashville.

"It’s just one of those things. I had to get better," he said.

Duffy was placed on the IL with a flexor strain in his left forearm. The move, which was retroactive to Friday, came after the left-hander had trouble getting loose following his start last Wednesday in Detroit.

"Honestly, I was really thankful for the news it wasn’t something worse," said Duffy, who is seventh in the majors among qualified starters with a 1.94 ERA in seven starts. "I’ll just sit for about five days and then re-asses."

Royals: RHP Kyle Zimmer (left trapezius strain) was activated after two rehab starts at Triple-A Omaha. He is 2-0 with a 3.38 ERA over 13 1/3 innings. ... SS Adalberto Mondesi (right oblique strain) moved from Double-A Northwest Arkansas to Omaha as he continues to rehab. He went on the IL the day before the season began.

Brewers RHP Corbin Burnes (2-3, 1.57) returns to the mound Wednesday night after his record streak of 58 strikeouts without a walk — which ended against St. Louis last week — was broken by the Yankees' Gerrit Cole on Monday night. RHP Brad Keller (3-4, 6.75) faces him for Kansas City.

A Palatine, Illinois man was cited for inattentive driving – after a Kenosha County sheriff's deputy noticed he