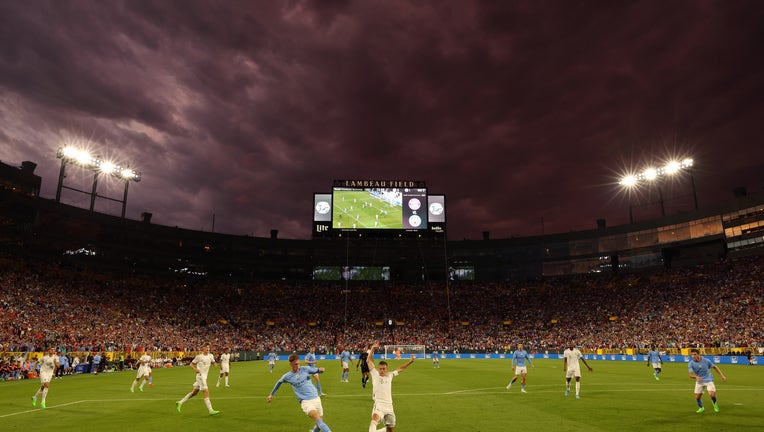 Soccer fanatics from all over the world made their way to Green Bay for today's big game.

What was supposed to be a full house at Lambeau Field Saturday night, turned into party in the arena's concourse after a weather delay caused the soccer match to be postponed.

Fans had to wait an extra 15 minutes before getting started because of lightning, according to our sister station, WLUK.

The stadium bowl was cleared at 5:42 p.m., 18 minutes before the match was set to begin, but Pedro Niccolini and Guvnch Garryev, didn't let that damper their night.

"More than 10 hours driving, totally worth it," said Garryev.

Niccolini and Garryev became friends by going to the same college, Missouri State. Niccolini is from Brazil and Garryev is from Turkmenistan.

Niccolini is a Bayern Munich fan and Garryev is a Man City fan. Once it was announced that the two teams were coming to Green Bay in May, they knew they had to go.

"As soon as it came out, marked it down on the calendar," said Niccolini.

"We started making plans and everything right away," said Garryev.

Rocky Yang is from Los Angeles and is a student at Berkley. He says he came here all by himself and still has to support his favorite team, Bayern Munich, no matter what the weather is like.

William Rosenthal may not have traveled as far as Yang, but still made the trip to see his favorite sports team all the way from Atlanta.

"It was actually a birthday present I had no idea about," said Rosenthal.