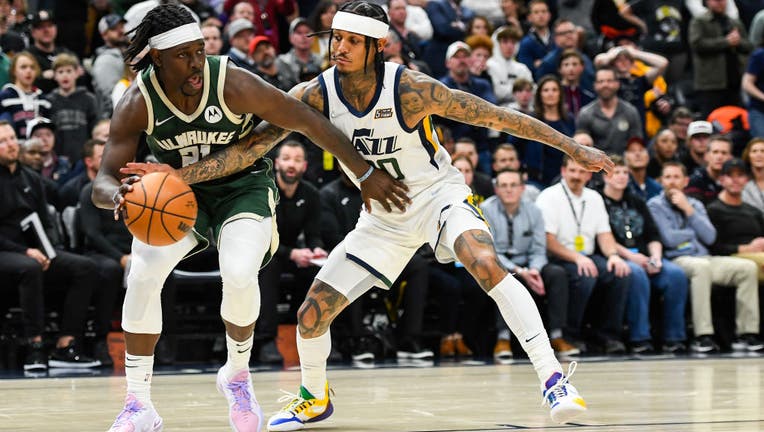 Jordan Clarkson #00 of the Utah Jazz defends Jrue Holiday #21 of the Milwaukee Bucks during the second half of a game at Vivint Smart Home Arena on March 14, 2022 in Salt Lake City, Utah. (Photo by Alex Goodlett/Getty Images)

MILWAUKEE - Giannis Antetokounmpo scored 30 points and had 15 rebounds to help the Milwaukee Bucks rally and then fend off the Jazz in the final seconds for a 117-111 victory on Monday night.

Jrue Holiday had 29 points and seven assists, and Khris Middleton scored 23 for Milwaukee, who saw Brook Lopez and George Hill both return to the lineup. Lopez had been sidelined with a back injury since the season opener and missed 67 games. Hill sat out 16 games with neck soreness.

The Bucks earned their first road win in the series since 2001.

"I think this is only place (where) I haven’t won at in my career, so to scratch that one off feels great," Middleton said.

The Jazz shaved a seven-point deficit to two on Gobert’s putback layup that made it 113-111 with 22 seconds left. But the Bucks’ Jevon Carter made a pair of free throws with 12.9 seconds remaining to seal it.

Utah struggled to generate shots inside the perimeter and missed six of their final seven shots.

"We made mistakes, had missed shots and turnovers," Mitchell said. "They are champs for a reason."

Utah made 10 3-pointers in the first quarter to offset 60% field-goal shooting from Milwaukee, including four 3s in a row — three from Mitchell — to take a 34-27 lead late in the quarter.

The Bucks led the entire second quarter after Middleton opened with a 3-pointer in the midst of a 22-6 run that put Milwaukee up 51-43. Holiday ignited the spurt late in the first quarter with back-to-back baskets.

"I think those 10 3s, they got a couple of open ones, but for the most part there was some that were contested, tough 3s," Holiday said. "It’s hard to do that for 48 minutes."

Utah fell behind after it didn’t score for five minutes, and Milwaukee led by as many as 12 points before halftime, going up 65-53 after Holiday made one 3-pointer and assisted another to finish off a 14-5 run.

The Jazz countered with a pair of big runs to surge back ahead in the third quarter, including 3s Mitchell and Conley to cap a 16-3 run. The Jazz used a 14-1 run, punctuated by a driving floater from Jordan Clarkson, to extend their lead to 91-80.

Milwaukee rallied before the end of third quarter and surged ahead 107-100 midway through the fourth quarter following back-to-back baskets from Antetokounmpo.

Utah scored just four baskets over a nine-minute stretch when the Bucks went back in front for good.

"I thought the way we closed the third quarter was a big, big difference in the game," Bucks coach Mike Budenholzer said.

Bucks: Milwaukee snapped a 19-game losing streak to Utah in Salt Lake City dating back to the 2002-03 season. … Holiday finished with a season-high five steals.

Lopez and Hill both played on a minutes restriction in their first game back from injury. Hill tallied 13½ minutes on the court and Lopez played for 14½ minutes.

Both players made a positive impact in their limited time: Lopez finished with six points and while Hill didn’t score, he had two rebounds, two assists, and two steals.

"I was just trying to make a difference however I could," Lopez said.

Working them back into the rotation full-time will present a slight challenge, but one the Bucks welcome considering Milwaukee is gearing up to defend its NBA title when the playoffs start in April. This is especially true with Lopez, who was one of the cornerstones of the Bucks’ dominant interior defense a season ago.

"He’s just somebody who’s incredibly valuable to us on both ends of the court," Budenholzer said. "I think he just gives the whole team a real confidence that there’s always somebody there that has their back."

Conley broke out of one the worst shooting slumps of his career by connecting on 10-of-13 shots. The veteran guard made six 3-pointers and gave Utah a boost at critical junctures to help the Jazz stay in the game down the stretch.

"The ball just went in," Conley said. "It was one of those things where I know what a good shooter I am and the kind of player I am, so I was just waiting a game like tonight."

Coming into Monday night’s game, Conley had made 5-of-34 field goal attempts and score 18 points total in his previous four contests. He made just two 3-pointers in that stretch.

"The biggest thing that he and I’ve talked about is just continuing to be aggressive," Jazz coach Quin Snyder said. "That’s what it was tonight. You know, whether the ball’s going or not. We need that from him. And he gave it to us."

Bucks: At Sacramento on Wednesday.