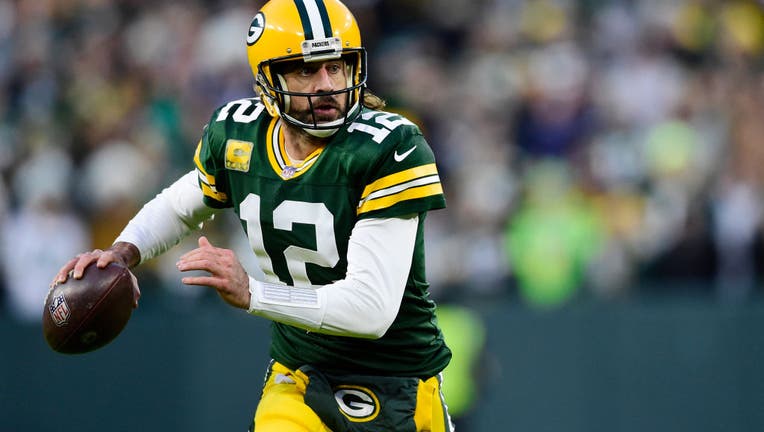 GREEN BAY, WISCONSIN - NOVEMBER 14: Aaron Rodgers #12 of the Green Bay Packers runs for a first down during the first half against the Seattle Seahawks at Lambeau Field on November 14, 2021 in Green Bay, Wisconsin. (Photo by Patrick McDermott/Getty I

GREEN BAY, Wis. - Aaron Rodgers ended up on the Green Bay Packers’ injury report with a toe injury he had been dealing with since he returned to the team following his 10-day isolation following a positive COVID-19 result.

Rodgers talked about the toe injury in his weekly spot on "The Pat McAfee Show" on Tuesday. McAfee asked the Packers superstar whether he suffered the injury while he was quarantined.

"Yeah, that was a COVID injury," Rodgers said.

The reigning 2020 NFL MVP was a bit coy about exactly what happened.

"It’s a little painful but I think I’ll be OK. I was able to run around a little bit on Sunday," he said, adding that the injury could’ve happened with him running a 2-minute drill in his backyard.

Rodgers and the Packers picked up a 17-0 victory over the Seattle Seahawks on Sunday despite the apparent toe injury.

In the win, Rodgers was 23-for-37 with 292 passing yards and an interception to Seahawks safety Jamal Adams. Rodgers didn’t have a touchdown pass in the game as the offense was supplied by running back A.J. Dillon, who had two touchdowns on the ground.

The Packers are 8-2 this season and have the Minnesota Vikings scheduled for Week 11. Rodgers told reporters Wednesday he plans to play in that game Sunday, via ESPN.

Before you begin that holiday food prep, the experts warn some contaminated herbs and spices are prompting health concerns.